Media (R)evolutions: Emerging Markets like Nigeria to Lead Sales of Technology Devices in 2015

New developments and curiosities from a changing global media landscape: People, Spaces, Deliberation brings trends and events to your attention that illustrate that tomorrow’s media environment will look very different from today’s, and will have little resemblance to yesterday’s.

2015 forecasts for sales of technology devices indicate global stability as the market remains at around one trillion USD, where it has hovered for the last three years. However, the forecasts also predict shifts at the country level as the top ten largest growth markets will increase by over $10 billion. Emerging markets, in which both volume and pricing contribute to positive sales, will dominate this growth.

India will experience the highest growth rate, primarily driven by smartphones sales, followed by China and then Nigeria – Africa’s largest economy, with tremendous reserve of human capital. China’s technology device market represents an interesting case study because it is predicted to grow by just $1.8 billion in 2015– a mere 1% increase over the estimated 2014 total– but that is still large enough for second place. Nigeria’s emergence is largely due to a vastly untapped market. 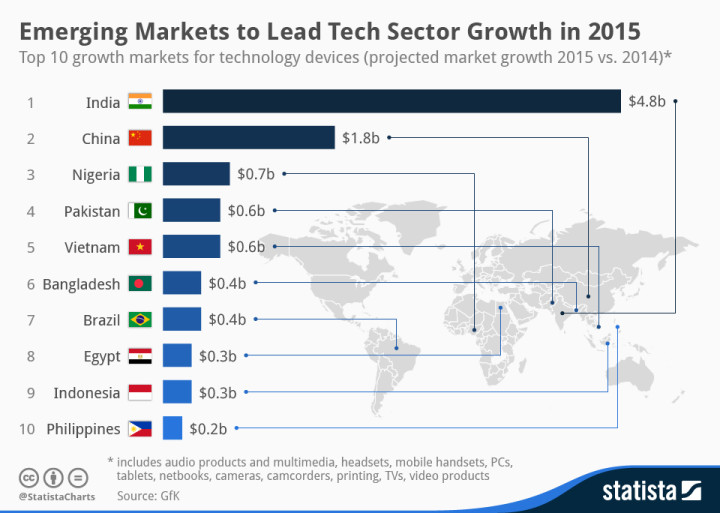 Smartphone sales contribute a great deal to the overall technology device market. Saturation of smartphone markets in developed markets are nearly complete, shifting much of the growth to developing countries. This table compares the forecast for 2015 to the estimated totals for 2014. Seven in the top ten are new entries (in green) since last year. 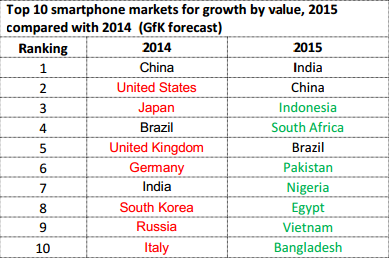