Nigeria Records Progress in Fight Against Corruption according to Transparency International

The corruption perceptions index measures the perceived levels of public sector corruption worldwide. Poorly equipped schools, counterfeit medicine and elections decided by money are just some of the consequences of public sector corruption. Bribes and backroom deals don’t just steal resources from the most vulnerable – they undermine justice and economic development, and destroy public trust in government and leaders.

Based on expert opinion from around the world, the Corruption Perceptions Index measures the perceived levels of public sector corruption worldwide, and it paints an alarming picture. Not one single country gets a perfect score and more than two-thirds score below 50, on a scale from 0 (highly corrupt) to 100 (very clean).

CORRUPTION IS THREATENING ECONOMIC GROWTH FOR ALL

Nigeria has recorded considerable improvement in its ranking on Transparency International’s corruption perception index (CPI) under President Goodluck Jonathan. In the latest report by TI, Nigeria is ranked the 39th most corrupt country in the world out of the 175 surveyed. Nigeria was ranked 144th in 2013, 139th in 2012 and 143rd in 2011 ─ with the 2014 position bettering that of 2013 by eight places to 136th, same position as Russia, Lebanon, Cameroon, Iran, and Kyrgyzstan.

According to Transparency International’s report on corruption perception index for 2014, Denmark is the least corrupt country in the world as it ranked 1 of 175 nations surveyed, with Somalia and North Korea as the most corrupt nations of the world.

Denmark comes out on top in 2014 with a score of 92, while Nigeria scored 27, with North Korea and Somalia share last place, scoring just eight. Nigeria rose by 2 points from the 2013 index, where it had 25 points and 27 in 2012, highlighting Nigeria’s progress towards the eradication of corruption. Botswana maintained its spot as the least corrupt country in Africa and the 31st least corrupt country in the world, with 63 points, dropping from 64 in 2013 and 65 in 2012.

Describing corruption, the non-governmental organisation said, poorly equipped schools, counterfeit medicine and elections decided by money are just some of the consequences of public sector corruption. Bribes and backroom deals don’t just steal resources from the most vulnerable – they undermine justice and economic development, and destroy public trust in government and leaders.

Corruption is a problem for all economies, requiring leading financial centres in the EU and US to act together with fast-growing economies to stop the corrupt from getting away with it, anti-corruption group Transparency International said today. 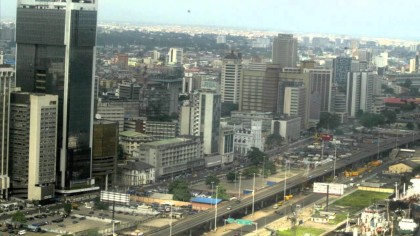 Lagos, the commercial nerve of the Federal Republic of Nigeria.

In the 20th edition of the Corruption Perceptions Index, scores for China (with a score of 36 out of 100), Turkey (45) and Angola (19) were among the biggest fallers with a drop of 4 or 5 points, despite average economic growth of more than 4 per cent over the last four years. Click here for the full index.

“Corrupt officials smuggle ill-gotten assets into safe havens through offshore companies with absolute impunity,” Ugaz added. “Countries at the bottom need to adopt radical anti-corruption measures in favour of their people. Countries at the top of the index should make sure they don’t export corrupt practices to underdeveloped countries.”

More than two thirds of the 175 countries in the 2014 Corruption Perceptions Index score below 50, on a scale from 0 (perceived to be highly corrupt) to 100 (perceived to be very clean). Denmark comes out on top in 2014 with a score of 92 while North Korea and Somalia share last place, scoring just eight.

The scores of several countries rose or fell by four points or more. The biggest falls were in Turkey (-5), Angola, China, Malawi and Rwanda (all -4). The biggest improvers were Côte d´Ivoire, Egypt, Saint Vincent and the Grenadines (+5), Afghanistan, Jordan, Mali and Swaziland (+4).

The Corruption Perceptions Index is based on expert opinions of public sector corruption. Countries’ scores can be helped by open government where the public can hold leaders to account, while a poor score is a sign of prevalent bribery, lack of punishment for corruption and public institutions that don’t respond to citizens’ needs.

China’s score fell to 36 in 2014 from 40 in 2013, despite the fact the Chinese government launched an anti-corruption campaign targeting corrupt public officials. The government has recognized the need to follow officials who hide ill-gotten gains overseas. This January, leaked documents revealed 22,000 offshore clients from China and Hong Kong, including many of the country’s leaders.

Corruption and money laundering are also problems for the other BRIC countries. This year has seen questions raised related to a major oil company using secret companies to bribe politicians in Brazil (which scores 43), questions about Indians (38) using bank accounts in Mauritius (54) and Russians (27) doing the same in Cyprus (63).

“Grand corruption in big economies not only blocks basic human rights for the poorest but also creates governance problems and instability. Fast-growing economies whose governments refuse to be transparent and tolerate corruption, create a culture of impunity in which corruption thrives,” said Ugaz.

Transparency International called on countries at the top of the index where public sector corruption is limited to stop encouraging it elsewhere by doing more to prevent money laundering and to stop secret companies from masking corruption.

While top performer Denmark has strong rule of law, support for civil society and clear rules governing the behaviour of those in public positions, it also set an example this November, announcing plans to create a public register including beneficial ownership information for all companies incorporated in Denmark. This measure, similar to those announced by Ukraine and the UK, will make it harder for the corrupt to hide behind companies registered in another person’s name.

The anti-corruption group is currently running a campaign to Unmask the Corrupt, urging European Union, United States and G20 countries to follow Denmark’s lead and create public registers that would make clear who really controls, or is the beneficial owner, of every company.

“None of us would fly on planes that do not register passengers, yet we allow secret companies to conceal illegal activity. Public registers that show who really owns a company would make it harder for the corrupt to take off with the spoils of their abuse of power,” said Transparency International Managing Director Cobus de Swardt.