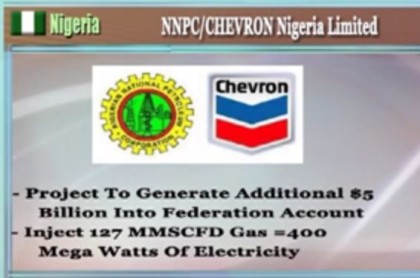 A statement by the Group General Manager Group Public Affairs Division, Mr. Ohi Alegbe says the deal was signed over the Weekend in London. It adds that the funding package which is being financed by a Consortium of Nigerian and International Leaders is an integral part of the accelerated upstream financing programme initiated by NNPC to address the perennial  challenge experienced by the Federal Government in providing its counter-part funding of JV Upstream activities.

Apart from contribution to the National treasury, the deal is also to contribute projected peak incremental gas production of 127 NMSCF/d which is equivalence of 400 Megawatts of electricity to boost domestic power supply.

The NNPC/Chevron Joint Finance Team and the Consortium of Local and International leaders was led by Standard Chartered Bank and U.B.A.