China, A Dependable Partner In Our Change Agenda – President Buhari 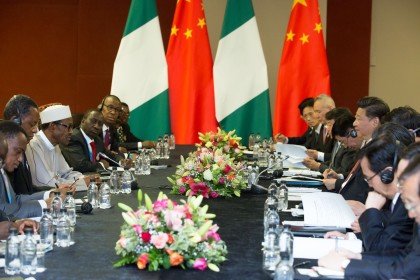 Nigeria and China At Side Meeting #China-Africa Summit

President Muhammadu Buhari Saturday in South Africa said that the Peoples Republic of China remains a strategic and dependable partner in his administration’s determination to change the direction and content of governance, including the management of the country’s resources with priority on accountability, transparency and result-orientation in governance.
President Buhari stated this in his address at the Roundtable of Chinese and African Leaders on the last day of the Johannesburg Summit of the Forum on China-Africa Cooperation (FOCAC). While noting that his administration has since its inauguration in May this year, embarked upon the “task of re-focusing our governance on the real needs of the vast majority of Nigerians,” the President said he was confident that China “will always stand shoulder to shoulder with us in our quest to fulfill the aspirations of our people to propel them to prosperity.”
On the 15-year-old FOCAC, President Buhari, who commended the theme of the Second Summit, “China-Africa Progressing Together: Win-Win Cooperation for Common Development, expressed the hope that it would “engender the right platform to engage Africa in all fields of human endeavours such as provision of essential infrastructure, skills development and capacity building, diversification of our economies and beneficiation of resources.”
While identifying with the laudable objectives of FOCAC in cultivating, fostering and deepening political, economic, technological, social and other forms of relations between China and Africa, President Buhari praised China for the vision behind the establishment of FOCAC as a platform for higher level Africa-China relationship. 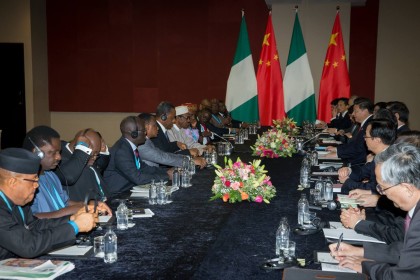 According to the Nigerian leader, “Africa expects Chinese investment flows to the real sector of our economies to promote African enterprises. Our over-riding objectives are to tackle the challenge of unemployment, wealth creation, food security and industrialization.”
He also stressed the crucial link between political stability, security and sustainable development on the African continent. “We are convinced that Africa can only leverage productively on the potentials of ties with strategic and development partners in an atmosphere of political stability and security of lives and property as well as in a policy environment that guarantees the sanctity of collaborative joint ventures and investment on the basis of agreed rules and regulations,” President Buhari said.
Drawing the attention of the Summit to the threat posed by global challenges such as fresh political conflicts, terrorism and other forms of extremism; trans-border crimes; illegal arms trade; irregular migration and cybercrimes, he said collective action was required to confront these new threats to global peace. “These are veritable threats to peace and security and without peace and security we cannot succeed in our development objectives,” he stressed.

According to President Buhari, China and Africa must work together to confront the above threats, as well as the challenge of climate change “for which Africa remains badly affected with severe threats to food security and social stability,” in addition to “unacceptable levels of poverty, unemployment and youth restiveness.”

The President said he looks forward to Second FOCAC (after China hosted the first one in 2006) coming out with a clear and sustainable roadmap for what he described as “this strategic engagement which will be mutually beneficial to both Africa and China in the efforts at promoting rapid socio-economic development for” both partners.