Refineries To Produce 10 Million Litres Of Petrol By Jan 2016 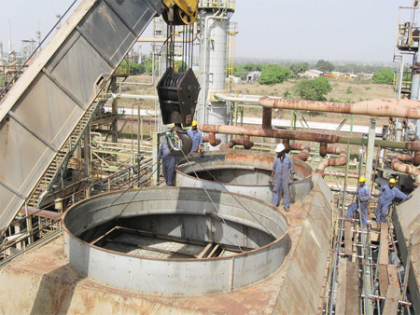 The Nigerian National Petroleum Corporation, NNPC says it is working to ensure that full efficiency returns to the nation’s refineries which are expected to produce about 10m litres of petrol per day by January 2016.
The Minister of State for Petroleum Resources, who is also the Group Managing Director of NNPC, Dr. Ibe Kachikwu made this disclosure during a working tour of the Kaduna Refining and Petrochemical Company (KRPC).

The Minister, said that a lot of energy was deployed into ensuring that the refineries are working.

“The more they work, the higher the chances that government will fix a comfortable price for Nigerians,” he explained.

Dr Kachikwu expressed optimism that by the end of January when all the refineries are fully back on stream, the 10 million type capacity out of about 40 million projected national consumption will be realized.

On petrol price modulation, Dr Kachikwu stated that the price of petrol will now be based on an average price mechanism with the Federal Government placing more emphasis on products availability and refineries efficiency.

In his words: “The president is very emphatic on this, he says for now; he expects that products should be about N87. He has also given approval for us to be able to look at market trends and make adjustments as need be.

My commitment and I think that is what the president’s commitment is: to provide products all the time so that there is efficiency, and provide it at the least possible price possible and let it have some relationship with what the trends are,” Kachikwu added.

He, however, observed that when the prices of petroleum begin to go up, government will look at those trends and then begin to see how the prices could be adjusted.

“We are not going to be fluctuating prices day to day. We are going to take like an average and I think that today when you look at prices, we have no subsidy but prices remain low and that is what we need to do. It is the honesty in being able to sell products to Nigerians at affordable prices that make sense, “ Kachikwu noted.

Explaining further, Kachikwu disclosed that subsidy doesn’t exist at the moment as petrol is still sold at N87 per litre, but in January 2016, government will look at what the trend is and announce prices.

According to him “If that is less than N87, we will announce it and if it is more than that, we will have to announce it”

He reiterated that the federal government would no longer continue to fund the gap paid on subsidy, which runs into huge amount of money.

With relative product stability in some major cities like Abuja, Kano and Lagos, the intervention is trucking-out large volumes of petrol to the hinterlands and deep country side where product distribution remains a challenge.

Despite the public holidays, over 22million litres of petrol are belived to have been trucked-out nationwide within the last 24 hours.