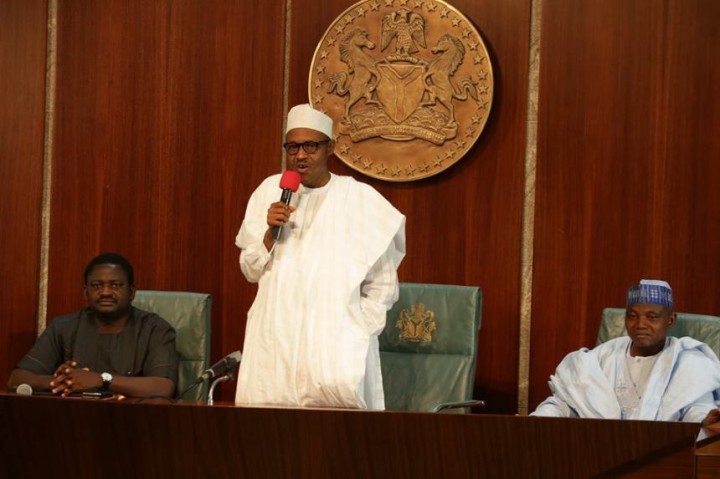 As part of its plans to reduce unemployment in the country, President Muhammadu Buhari said his administration will give full attention to the rapid revival of ailing and moribund textiles, mining and Agro-based industries.

At an audience with a delegation of foreign investors, President Buhari declared that the creation of more jobs for Nigeria’s unemployed youth was the key objective of his administration’s economic agenda and will be pursued with the greatest possible dedication. “I still recall with clarity that at some point, the textile industry in Nigeria was employing about 320,000 Nigerians. But today, the same industry employs less than 30,000 people and the factories operate below capacity or they are
completely closed. “I have made a promise to Nigerians that jobs will be created as part of efforts to revive the economy and that promise will be fulfilled. We will move as fast as we can to resuscitate the textile and mining industries, and also improve production in our agricultural sector.

“Now that we are trying to create jobs, we cannot allow industries and factories to close down. Instead, we should be making every effort to ensure that we re-open the closed ones and attract new ones to reduce unemployment,” President Buhari told the investors who are the proprietors of Olam Farms Nigeria Limited. The President assured the delegation, which was led by Mr. Mukul Mathur, that his administration will encourage investments in agriculture and other sectors of the economy by creating a more favourable environment and enabling laws.  President Buhari said that he had already ordered some immediate interventions to address current challenges faced by industrialists in the country after receiving briefings from the Ministry of Agriculture and the Ministry of Industries, Trade and Investment.

“We will move very quickly to see what we can do to help you and other investors in the country so that you can help us to create jobs for our people,’’ the President told Mr. Mathur and his team.  Mr. Mathur told the President that Olam Group of Companies was established in Nigeria in 1989, and currently employs about half a million Nigerians, directly and indirectly. He added, however, that the group was facing difficulties with the reversal of some government policies in 2010 and 2013, which could lead to the closure of some of its industries in the country.
Femi Adesina
Special Adviser to the President
(Media and Publicity)
July 8, 2015