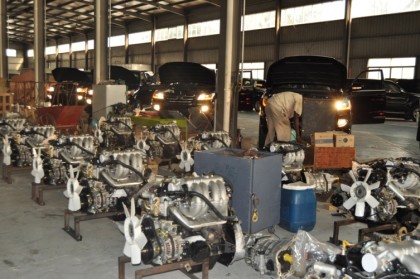 Senate President, Dr. Abubakar Bukola Saraki has said all arms of government have a duty to ensure the success of indigenous manufacturers as a way of rebuilding the economy and putting Nigerian youth to work.

Saraki while receiving a delegation from the Innoson Motor Manufacturing Company, Nnewi, led by Chief Innocent Chukwuma, the Chairman and founder of the company, in his office today (Monday) said government should use legislative actions and policy initiatives to protect the local industries as a deliberate way of reviving the economy.

Innoson Motors is the only Nigerian company manufacturing automobile of different ranges and it is based in Nnewi, Anambra State.

He said one of the actions government should quickly introduce is to ensure that local industries are patronized by government agencies so that Nigerian manufacturers can enjoy the advantages accruing from the big market that her population offers.

“That is why this eighth Senate is determined to amend the Procurement Law to ensure that government agencies patronize Made in Nigeria products. I am sure the House of Representatives is in support of this. It is our joint responsibility to ensure that you succeed. If you are successful, a lot more small and medium scale enterprises will draw inspiration from you and they will become successful.

“That will help to create jobs which is one of the mandate presented to us by the youths of this country during the last elections. We in the legislature will look at all laws and help to create an enabling environment for local businesses to thrive in Nigeria”, he said.

The Senate President said using laws to protect locally made goods is not peculiar to the country as it has been done in the United States under President Herbert Hoover in 1933 while India and China have also enacted similar laws in the past.

He lamented a situation where a company like Innoson only sold about 3,000 vehicles in 2015 when Nigerians buy about a million vehicle annually, adding that If Nigerians patronise Made in Nigeria cars it will force foreign manufacturers to set up plant here.

In his remarks, Mr Alfred Nwosu, said the Innoson Group started from manufacturing of motor cycles and graduated to tricycle before it is now producing different range of utility and luxury vehicles.

He said the Group has 7,000 Nigerians on its pay roll while there are 300 youths from the Niger Delta area undergoing training that were hitherto held abroad.

Nwosu commended Saraki and the Senate leadership for their prompt response to the request for audience sent by the company, an opportunity that had eluded the company in the past.

“In less than 48 hours of contacting the Senate President, we were told to come over. We are encouraged by your views on Made in Nigeria goods. What we need is the support, encouragement and inspiration from decision makers like you”, he said.

He specifically charged members of the executive of the association who visited him in Abuja that it is time for them to find ways of producing locally most of the goods they have been importing into the country.

Earlier, the President-General of SEAMATA, Chief Okwudili Ezenwankwo had called for urgent measures by the Federal Government to ease their access to foreign exchange that is used to import the goods they sell.

Ezenwankwo said that 70 per cent of traders in the South East would be thrown into the labour market if nothing urgent is done to enable the traders access forex. He lamented a situation where goods imported by the traders since December 2015 are still lying at the ports accumulating demurrage simply because the clearing authorities are yet to receive confirmation from the countries of origin of the consignments.

He called on the Federal Government to fix an exchange rate for the Naira rather than leaving it at the mercy of market forces.

He added: “The $10,000.00 limit of what one can take across our borders is another major constraint to our business.”