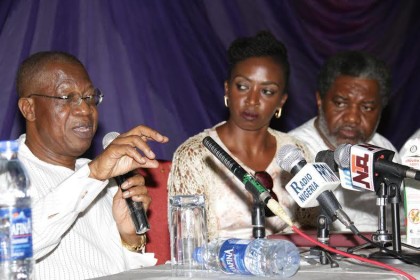 The Federal Government has said it will work with relevant bodies to fight the piracy of intellectual property in the country, while saying the establishment of a National Endowment for the Arts will bridge the funding gap in the sector.

The Minister of Information and culture, Alhaji Lai Mohammed, gave the assurance in Lagos on Sunday, at his maiden Roundtable with stakeholders in the movie industry, tagged ”Redefining The Nollywood Strategy.”

While enumerating the negative effects of piracy, which he said has become ”a monstrous disincentive to the creative industry,” the Minister noted that the government is committed to battling piracy, as exemplified by the President’s directive to the relevant agencies to reduce the menace to the barest minimum.

“My immediate suggestion is for us to declare piracy as an economic crime, have a regulatory direction, domesticate most of the international conventions on piracy, review and strengthen existing copyright law as well as make the punishment for copyright more stringent so as to discourage pirates.

“Perhaps a longer jail term with no option of fine and a speedy trial of suspects as we have in other countries will help in this fight. I think also that the entertainment industry is ripe enough to have a dedicated National Task Force on Piracy. We shall propose that and see how it all works out for the good of our cultural industries and the nation. We truly need a proactive enforcement of the copyright law so as to make the creative industry lucrative,” he said.

Alhaji Mohammed, who acknowledged lack of funding as another major challenge facing the movie industry, said the establishment of a National Endowment for the Arts would help tackle that challenge not only for the movie industry but the entire creative industry.

“Like the American model, we should at this time – when we are trying to streamline spending – think of having a properly established National Endowment for the Arts (NEA) that will service all genre of the arts. I have no doubt that the establishment of NEA will facilitate the introduction of Tax Rebates as incentives for sponsors of the arts and will give prime place to the arts and cultural sector in budgeting processes, since it has capacity to create massive job opportunities.

”The good news is that, as part of our massive social intervention policy, this administration has made available the sum of N500 billion naira to be accessed by creative people like you as well as artisans, market women, unemployed youths and others,” he said.

The Minister also expressed his readiness to convene a review meeting of the Nigerian Film Policy in order to fast-track the setting up of the Motion Picture Practitioners Council of Nigeria (MOPPICON) that will address most of the issues that have bedeviled growth in the industry, including distribution, regulation, financing, incentives for investors who sponsor the arts, visibility for artistes in matters concerning their trades, establishment of a film fund and how the fund will continuously be funded as well as the structural deficiency in the sector.

The Minister said that as part of the ongoing restructuring of the agencies under the ministry, the regulatory bodies in the ministry would be infused with purposeful, practical, dynamic and experienced leadership to drive the agencies in line with global best practices.

On the issue of distribution of movies, he noted that the present chaotic distribution network cannot achieve the desired objective, and promised to meet with the practitioners and the regulatory agencies to work out effective policies and strategies to tackle the distribution challenge.

“A possible strategy is for us to have an Investment Forum where we can attract real investment in the area of distribution of entertainment content. At the moment, we have very small players in that sector. We need to attract big corporations and we can do that through an investment forum, where we will show them what they stand to gain from investing in distribution, and of course we shall present incentives that will attract them.

”Besides, I am proposing that we hold an annual Film Market that will grow into a huge tourism event and will emerge as the biggest content market in the continent. Such events have potentials of attracting investors to an industry. We shall also look at the provision in the film policy that encourages the state to invest in the setting up of community cinemas in the 774 local government areas of the country,” the Minister said.

Alhaji Mohammed expressed dissatisfaction with the current practice in which television and cable TV stations operating in the country saturate the airwaves with foreign soaps, and advised them to fund the local production of movies and documentaries as obtained in other parts of the world where television and cable stations sponsor contents and provide airtime for them.

He harped on the need for all the stakeholders in the movie industry to come under one umbrella in order to articulate their problems and to better interface with the government, instead of the current situation where there are fragmented bodies and guilds in the industry

Responding on behalf of the Nollywood stakeholders at the meeting, Mr. Mahmood Ali-Balogun, commended the Minister for his indepth knowledge of the industry.

“You have enumerated everything that is bedeviling the industry these past years, even proffering solutions before hearing us,” he said.

Mr. Balogun, who is the Chairman of the Audio-Visual Rights Society of Nigeria (AVRS), called for the total overhaul of the regulatory agencies in the ministry and the appointment of people with requisite qualification, understanding, experience and exposure to man the agencies for optimal performance.

The event was attended by many Nollywood personalities including Ralph Nwadike, Saidi Balogun, Kate Henshaw, Peace Anyiam-Osigwe and Lancelot Imasuen.