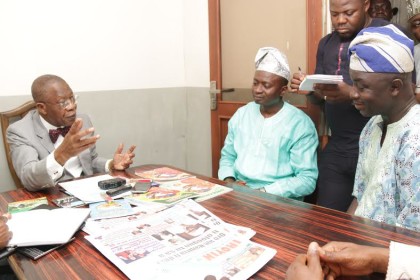 The Federal Government has said that no mount of orchestrated attacks or campaign of calumny against those they believe to be in the forefront of the war against corruption will deter it from vigorously waging the battle.

The Minister of Information and Culture, Alhaji Lai Mohammed, gave the assurance on Friday when he visited two Yoruba-language newspapers, Alaroye and Iroyin Owuro, in Lagos.

”We are winning (the fight against corruption). We won’t relent. We won’t retreat. With the support of the people we are fighting for, we will win.” he said. ”It takes a very transparent leader like President Muhammadu Buhari to fight corruption. But we are aware that corruption will fight back.”

The Minister rallied the support of the newspapers in the fight against terrorism and corruption, saying the indigenous newspapers are a ‘missing link’ in the government’s efforts to reach the people at the grassroots, hence his decision to visit them.

”We recognize your powerful platform and we want that platform to be used for nation building,” he said, while soliciting their support for the impending national reorientation campaign of the government

Alhaji Mohammed said he visited the two newspapers in a dual capacity, as the Minister of Information as well as Culture, noting that part of the mandate of the National Institute for Cultural Orientation (NICO), an agency under the ministry, is to preserve indigenous languages – which is the same thing that the indigenous newspapers are doing.

He urged the publishers of all indigenous newspapers in the country to come together and form an association that will make it possible for them to articulate their challenges and facilitate the resolution of such challenges.

At Iroyin Owuro, he commended the publishers for their tenacity in keeping alive the newspaper, which was founded about one-and-a-half years ago.

The Publisher of Alaroye, Mr. Alao Adedayo, and his Iroyin Owuro counterpart, Mr. Yinka Alabi, both described the Minister’s visit to their newspapers as ‘historic’.

”Your coming here is historic, being the first Minister of Information or the most senior government official that has visited Alaroye or any indigenous newspaper,” said Mr. Adedayo.

He said Alaroye, which is 20 years old, is the number one newspaper in the South-west, as it prints over 50,000 copies, in addition to reaching far beyond Nigeria, and called for recognition for all the professionals in the indigenous newspapers.

The visit is part of the Minister’s ongoing tour of media establishments in the country, which has taken him to the Punch, Vanguard, Nation, as well as three Hausa language newspapers – Rariya, Aminiya and Leadership Hausa.