Assessing The Gains Of Buhari’s Visit To Saudi Arabia 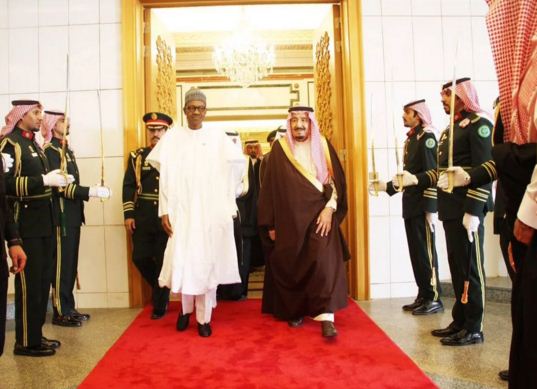 Analysts observe that one of the gains of President Muhammadu Buhari’s recent visit to Saudi Arabia is the commitment obtained from King Salman Bin Abdulaziz Al Saud to arresting the falling oil price in the international market.

They note that the commitment will boost the efforts of the Buhari’s administration by revamping the nation’s economy because 70 per cent of Nigeria’s national income comes from oil and gas sales.

Buhari and Al Saud, at a bilateral meeting held in Riyadh, expressed their commitment to a “stable oil market’’ and a “rebound of oil price’’.

“They, therefore, committed themselves to doing all that is possible to stabilise the market and rebound the oil price,’’ he said.

Beside this, the two leaders agreed that terrorism posed a common threat to their states and stressed the need for close cooperation on fight against terrorism.

Although Buhari applauded the Saudi Arabia for spearheading the coalition of Islamic States against terrorism, he said Nigeria would not be able to join the coalition.

“Even if we are not a part of it, we support you. I must thank the Kingdom of Saudi Arabia for the recent creation of a coalition to address the menace of international terrorism.

“Nigeria will support your efforts in keeping peace and stopping the spread of terror in your region.

“This is in consonance with our own commitment and ongoing efforts in seeking to stamp out Boko Haram terrorists from the West African sub-region and Lake Chad Basin Commission ,’’ Buhari said.

He thanked the Saudi government for its continuing support to Nigeria in the fight against terrorism.

Speaking on the ongoing crisis in Libya, Buhari regretted that the late Libyan leader Muammar Ghaddafi recruited, trained and armed citizens of many states in the Sahel region.

“With his fall, these mercenaries have returned to their countries, doing nothing but to shoot and kill,’’ he observed.

He cited Burkina Faso and Mali as the main victims but expressed delight that the countries neighbouring the Lake Chad had tightened their ranks to void the Boko Haram threat.

“Luckily, we have cultivated our neighbours. We are now working together against Boko Haram, otherwise the problem would have become worse,’’ he added.

Al Saud commended the progress made by Nigeria in combating terrorism and promised to give further support.

The king pledged his support and cooperation for Nigeria and directed all agencies of his government to follow up on the discussions.

“I now instruct my team to go and sit down with your relevant agencies to push forward cooperation between our states,’’ he said.

He cited the Treasury Single Account (TSA) and the Zero-based budget as some of the meaningful financial policies introduced by the Federal Government to check fraud in the system, saying it had started yielding fruitful results.

According to him, the nation has so far realised more than N2.6 trillion from the newly introduced TSA.

He, therefore, expressed optimism that with the introduction of the single account, the 2016 budget implementation might not record any form of deficit at the end of the financial year.

On the ongoing fight against Boko Haram insurgency, Buhari said that his administration was determined to tackle the menace.

“As you are all aware, insecurity has been a serious challenge for us in Nigeria, however, our armed forces have done a great job in dealing with the Boko Haram.

“We have also intensified collaboration with the Multinational Joint Task Force to handle the threats within the sub-region.

“These renewed efforts helped to decimate the capacity of the insurgents and as I speak to you, the group is not in control of a single territory in Nigeria,’’ he noted.

Buhari also restated the determination of his administration to tackle the problem of corruption in Nigeria, noting that the present administration had zero tolerance for corruption and other unethical practices.

“This government will do everything within the provision of the constitution to recover stolen funds and put an end to corrupt practices.

“This will be done by empowering relevant government agencies and institutions to carry out the task of nipping corruption in the bud and dealing decisively with anyone found wanting,’’ he said.

He said the Federal Government was working to fully diversify the economy, which in essence, would open up new opportunities for Nigerian entrepreneurs and foreign investors.

He said that government had begun addressing the challenge of unemployment, insisting that the objective of his administration was to take steps to address these challenges and restore the confidence and trust of Nigerians including those in the diaspora.

Buhari commended the Charge’ D Affaires, the Consular-General and all the members of staff of the Nigerian Embassy and the Consulate for working tirelessly to ensure the success of his visit.

He said the Federal Government would work with the government of Saudi Arabia to solve some challenges they might be facing.

Observers are hopeful that Buhari’s visit to Saudi Arabia will also strengthen the existing cultural and economic ties between Nigeria and Saudi Arabia for the overall benefits of both countries.