The Minister of Information and Culture, Alhaji Lai Mohammed, and the Lagos State Governor, Mr. Akinwunmi Ambode, on Monday toured the National Museum at Onikan in Lagos, preparatory to the redesign and modernization of the edifice into a world-class historical hub and tourist site. 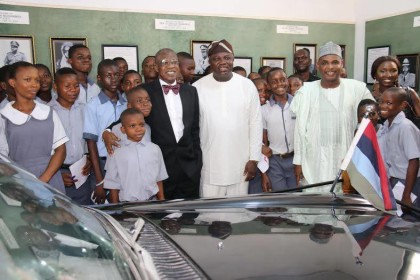 The visit is a follow-up to the promise by Gov. Ambode, during a courtesy visit to him two weeks ago by the Minister, to collaborate with the Federal Government in the modernization of the National Museum.

Mr. Ambode said the partnership would entail the utilization of the fallow land around the museum to erect new structures while the old building remains intact.

He said a multi-layer car park, which the state government is constructing near the museum, would complement the proposed modern museum.

“You will recall that two weeks back, the Honourable Minister of Information and Culture was in my office and we did speak about establishing a new museum here and as a follow up, he decided to invite me again today to see things for myself.

”So what we have done today is to find out what is required to collaborate and I am happy the DG has been able to take us round. We have seen what we have here and we believe that with this new partnership, Nigeria will be better for it. What I have seen is that we have enough space to actually create a new museum – a modern one – while the old one is still also in place,” Mr. Ambode said.

The Governor said this is the kind of collaboration the Lagos State Government required with the Federal Government to create more jobs through culture and tourism and also to conserve the nation’s cultural heritage.

He described the project as a legacy for the APC government in the country,which goes beyond showcasing it as part of the activities to celebrate the 50th anniversary of the creation of Lagos State.

“Even in the course of my campaign, I actually said that there is a programme called THEAS and this stands for Tourism, Hospitality, Entertainment, Arts and Sports, but it’s not about revenue generation but about job creation. My emphasis is about creating jobs for the lower strata,” the Governor said.

In his remarks, the Minister said the project is like a dream come true and described it as one of the biggest collaboration so far between the Federal Government and a State Government in the area of culture and tourism.

“That the Governor has been able to come here today is an eloquent confirmation that he is ready to walk his talk. The issue goes beyond Lagos State.I think it’s about Nigeria,” he said.

The Minister stressed the need to utilize tourism and culture to create jobs and also bring out the best in people in terms of talents and creativity.

He said the Federal Government is aiming to turn the museum into another hub for culture, tourism and entertainment, thanked the Governor for his generosity and vision and gave the assurance that the project will be accelerated.

“That the Governor is here less than two week after his promise speaks volumes about his intention. On our side, we would spare nothing to ensure that this project is realized,” he said.

The Director General of the National Museum and Monuments, Mr. Yusuf Abdallah Usman, who guided the Minister and the Governor on the tour, said culture is on the concurrent list, which envisages collaboration of all tiers of government to develop culture and tourism.