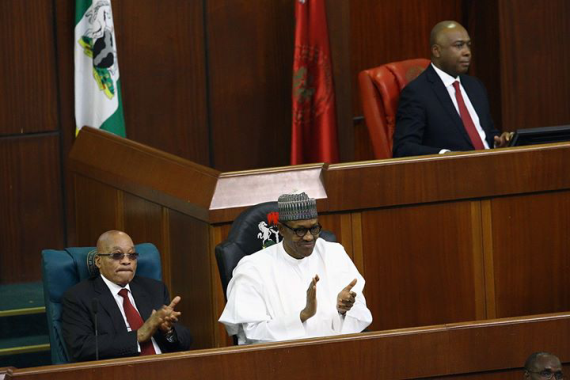 President Jacob Zuma of South Africa while addressing a joint session of Nigeria’s National Assembly in Abuja, said his visit was significant for both countries to improve relations through benefiting business partnership to diversify economic sectors like agriculture, electricity and manufacturing.

The joint session was presided over by senate President Bukola Saraki, has in attendance President Muhammadu Buhari and the Speaker house of Representatives Yakubu Dogara.

Earlier, President Muhammadu Buhari and President Zuma in a meeting, signed 30 bilateral agreements between the two countries. This showed commitment by both leaders to improve economic and trade ties and also strengthen relations between the Africa leading economies.

In a reconciliatory mode, President Buhari put to rest the perceived harsh regulatory actions imposed on some South African companies. He said the issues will be looked into, but he frowned at MTN’s in-actions to disconnect 5.2 million unregistered subscribers and decision to take NCC to court over $3.9m fine imposed on the telecom company.

President Zuma while speaking during the joint section, lauded Nigeria’s role in the South Africa’s fight against apartheid and colonialism.

He recalled the various contributions of Nigerians in the struggle. “From the mid-70s‚ Nigeria and its people also hosted some of the exiled freedom fighters from South Africa‚ with numbers increasing after the Soweto Student Uprising in 1976‚” Zuma said.

He quoted former Head of State, late General Murtala Mohammed in his speech to the (Organisation of African Unity) Extraordinary Summit on Angola in 1976‚ said: ‘Africa has come of age.” and will “no longer accept dictates from any so-called superpower.’ ”

Zuma also called for reform of United Nations Security Council and other UN Institutions and International bodies to reflect the need of Africa.

He said that South Africa and Nigeria were strategic partners in the pursuance of the African Agenda, South-South Cooperation and in the promotion of a rules-based International System.

Both countries share a common vision on issues of political integration in Africa and on the need for a sustainable conflict resolution mechanism in Africa that is primarily driven by Africans.

President Zuma said both nations share the views about the reform of the International financial institutions, the IMF, the World Trade Organisation and the World Bank to be more reflective of the realities of the changing international environment.

He also called on both countries to continue advocating for rules-based international system and unite in order to achieve a more just and equal world.

Zuma concluded that South Africa and Nigeria’s experience in the peaceful settlement of disputes, peace building and peace keeping missions was of utmost importance for progress in Africa in general.