Buhari: Power No Longer A Laughing Matter, To Provide Additional 10,000 Megawatts By 2019 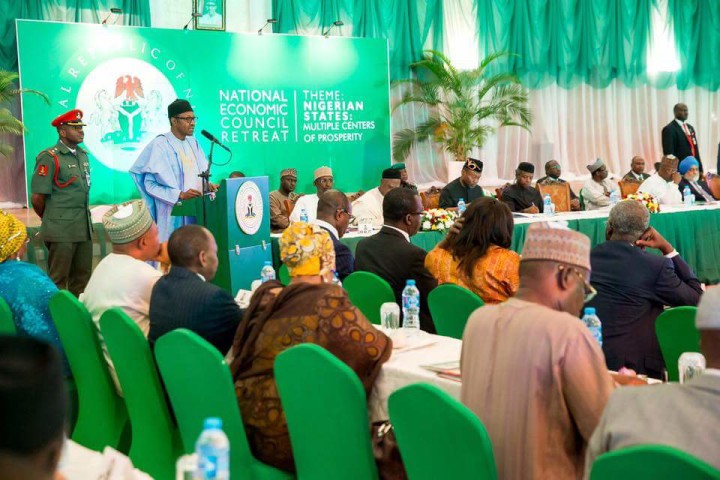 President Muhammadu Buhari on Monday, has aasured Nigerians that his administration would ensure steady power supply before the expiration of his tenure through the provision of additional 10,000 megawatts.

The President made this known at the National Economic Council Retreat holding at the Presidential Banquet Hall, Abuja.

He described the power situation in the country as no longer a laughing matter.

The President, who stated that the nation was facing the classic dilemma of privatisation of the power sector, noted that no remarkable improvement in the quality of service had been recorded after the exercise.

He, however, stated that the National Electricity Regulatory Commission (NERC) must ensure that consumers get value for money and over-all public interest is safe-guarded as government will complete the process of the privatisation.

Buhari further gave assurance that government will hasten the completion of pipelines from gas points to power stations.

He said that more security to protect gas and oil pipelines would be provided while power companies should be encouraged to replace obsolete equipment and improve the quality of service and technicians.

He stressed the need for companies to also address the issue of high electricity bills in spite constant power shortage.

On the manufacturing sub-sector, President Buhari expressed regret over the inability of some industries in the country to obtain foreign exchange to import raw materials and spare parts.

President Buhari, who also spoke on current state of the nation’s agriculture, noted that for too long government policies on agriculture had been “half-hearted, suffering from inconsistencies and discontinuities.”

He said government must urgently take actions to ensure self-sufficiency in food production in the country.

According to him, the nation’s real wealth lies in farming, livestock, hatcheries, fishery, horticulture and forestry.

The President directed the Federal Ministry of Agriculture to convene early meeting of stakeholders and identify problems facing the agricultural sector with a view to addressing them.

He also urged the media to enlighten the public on government’s efforts towards increasing local food production so as to bring down food prices in the markets.

He urged banks to substantially increase their lending to the agricultural sector and the Central Bank of Nigeria (CBN) should bear part of the risk of such loans as a matter of national policy.

“States should increase their financial support through community groups.

The President called on state governments to financially support community groups through their leaders, groups such as farmers’ cooperatives.

He also said that state governments should make provision of feeder roads to enable more effective evacuation of produce to markets and processing factories.

He recalled the 1950s, when Nigeria’s foreign exchange earners were from the export of groundnuts, cotton, cocoa, palm kernel, rubber and all agro/forest resources.

He further stated that regional banks and development corporations in all the three regions were financed from farm surpluses.

“When I was a schoolboy in the 1950’s the country produced one million tons of groundnuts in two successive years.

In his remarks, the Chairman of the Nigeria Governors’ Forum (NGF), Alhaji Abdulaziz Yari, expressed displeasure at the drastic fall in income from the Federal Accounts Allocation.

He, however, stressed the need for the country’s natural resources to be harnessed to address the current economic challenges.

Yari expressed hope that the retreat will come up with practical solutions aimed at growing the nation’s economy.

All the governors except Rivers, Benue and Lagos states (represented by their respective deputies) attended the opening of the two-day retreat being presided over by Vice-President Yemi Osinbajo.

The Governor of the Central Bank of Nigeria (CBN), Mr Godwin Emefiele, and the Minister of Budget and Planning, Sen. Udoma Udo Udoma were among other top government functionaries in attendance.