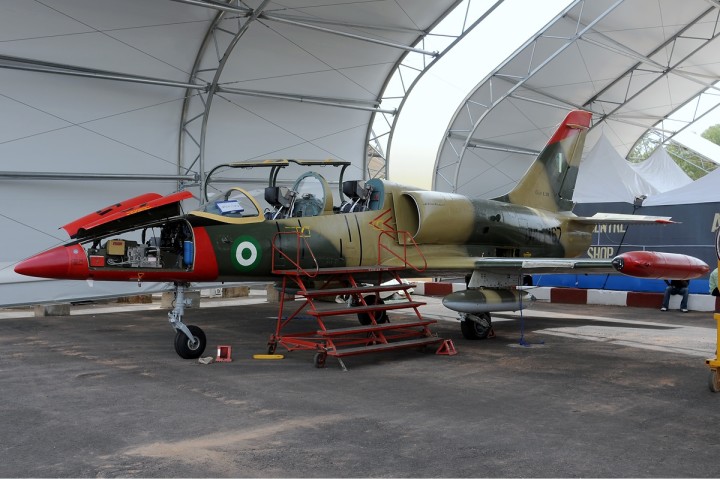 The Nigerian Air Force and Innoson Vehicle Manufacturing Company on Wednesday have finally signed a Memoranda of Understanding (MoU) that would see the company produce spare parts for the air force fighter jets.

The News Agency of Nigeria (NAN) reports that the move is aimed at intensifying the campaign against insurgency especially in the North Eastern parts of the country.

The Chief of Air Staff, Air Marshal Sadique Abubakar, who made this known to pressmen in Nnewi, Anambra, explained that the MoU helped the air force to keep its jet fleet running for months.

Abubakar, who was represented by the Chief Of Policy and Plans, Air Vice-Marshal James Gbum, said that the MoU would further solidify the collaboration, improve local content and engineering as well as save the country a lot of foreign exchange hitherto used to import expensive spare parts.

He said the war against the terror will be in vain if something is not done to ensure that spare parts are made available.

He gave an example of a situation when some fighter aircrafts (Alpha Jets) were down, and they were considered to form the backbone of the struggle against Boko Haram. “Due to lack of spare parts, mainly the break assemblies of these aircrafts.” He said.

“The Chief of Air Staff (Air Marshal Sadique Abubakar) immediately ordered our research and development cell in Ka’inji to start to research into this break assembly overhaul.

“They went ahead, carried out the research, (however) the first proto-type they brought couldn’t pass the test.

“To this effect, we have reasonable number of these Alpha Jets serviceable daily to fight the war in the North East.

“So, today we as representatives of the Chief of Air Staff are here officially to sign a Memoranda of Understanding (MoU) with Innoson Vehicle Maintenance Company.

`”The Nigerian Air Force considers this co-operation with the indigenous company as very very important in producing some of the spare parts locally.

“This is in-line with the change agenda of the President and Commander-in-Chief of the Armed Forces, President Muhammadu Buhari (GCFR) and it is also in line with the vision and key-drivers of the Chief of Air Staff.’’

The Chief Executive Officer (CEO) of the company, Chief Innocent Chukwuma, said the company had the human and technical competence to sustain the collaboration.

“When they (Nigerian Air Force) came to me, I developed it the way they wanted it and they are happy with it and that is why they are here again.” He said.

He added that the MoU will move Nigeria forward because the country can not continue to depend on imported items and that the company will always strive and remain committed to do anything the Airforce wants.

Earlier in his comments, Gov. Willie Obiano of Anambra, said the company had been a veritable tool for technical and engineering advancement of the state.

Obiano said this when the Nigerian Air Force team paid him a courtesy call at the Government House, Awka.

“This great initiative of yours to partner with Innoson Motors in helping you to get some spare parts to service, I believe it won’t be only aircraft, as times goes on you will be able to buy the four-wheel (drive vehicles) that would replace the Hilux (pick-up vehicles) that are imported.

“The beauty about Innoson is that they always have the parts and are a phone call away.

“I am confident that he been able to get this big deal. He said

The Governor said that 500 youths in the state who are doing automobile engineering, are now taking their practicals in the company’s factory at Nnewi.

He also commended the Air Force for it’s decisive blow given to Boko Haram and the recovery of virtually all the lands the terrorists have taken.

He added that all that is left now is a mop-up operation.

Highlight of the event was the signing of the triplicate copies of the MoU by representatives of the company and the Nigerian Air Force.