The Senate has set up a nine-member ad hoc committee on Wednesday, to examine the financial losses and leakages contained in the 2013 Nigeria Extractive Industries Transparency Initiative (NEITI) audit report.

This followed a resolution reached by the lawmakers shortly after the Executive Secretary of the agency, Mr Waziri Adio, briefed them on the content of the audit report at plenary. 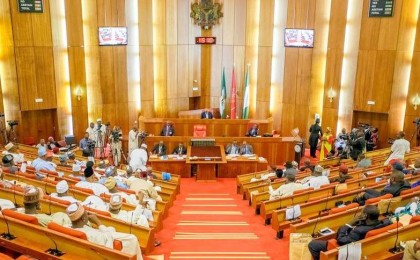 In his remarks, the President of the Senate, Dr Bukola Saraki, announced Chairman, Committee on Petroleum (Downstream), Sen. Jibrin Barau, as chairman of the ad hoc committee.

He said that the “outrageous’’ amount of money lost in the oil and gas sector as contained in the report would be taken seriously by the National Assembly.

According to him, the ad hoc committee will be saddled with the responsibility of scrutinizing the financial loss and leakages to government and come up with measures to tackle the problem.

“The terms of reference are that the committee is to re-examine the financial processes and the fiscal audit report of the NEITI, the financial loss and leakages to government and all its ramifications.

“The others are remedial measures and sanctions where necessary, and of course and more importantly, any relevant legislative action that will be required to block all forms of leakages,’’ Barau said.

The members of the committee are Sen. Tayo Alasoadura, who is the Chairman, Petroleum (Upstream); Sen. Bassey Akpan, Chairman, Committee on Gas and Sen. John Enoh, Chairman, Finance Committee.

Others are Sen. Chukwuka Utazi, Chairman, Anti-Corruption Committee; Sen. Kabir Marafa, Sen. Solomon Adeola and Sen. Bukar Mustapha.
The committee is expected to complete its assignment and report back to senate in four weeks.