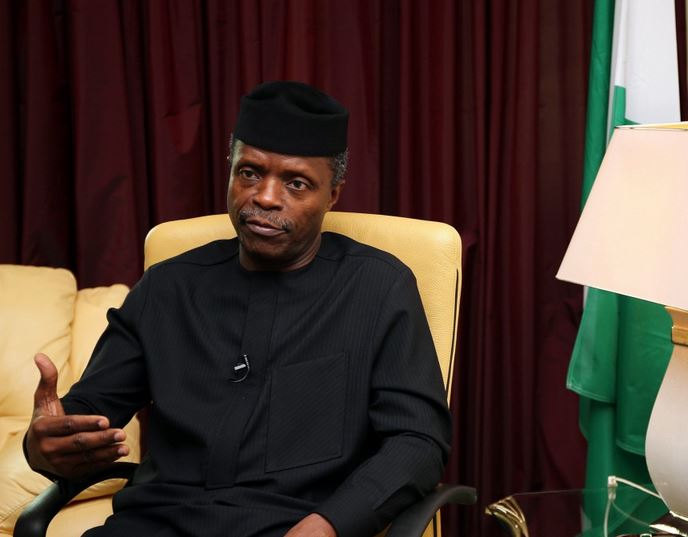 Vice President, Professor Yemi Osinbajo, says that having an easy source of revenues denied Nigeria the opportunity to engage in the critical thinking and prioritization that usually drives development.

This was stated in a press release made available to the media by the Senior Special Assistant, Media & Publicity to the Vice President, Laolu Akande on Thursday in Abuja.

Osinbajo spoke today at the launching of the Standard Operating Procedures (SOP) and Port Services Support Portal (PSSP) for Nigerian Ports hosted by the Ministry of Transportation in Abuja on Thursday with other top government and private sector functionaries including Transportation Minister Rotimi Amaechi in attendance.

He said the country must reduce the current dependence of the federal and the state governments on the ritual sharing of revenues from oil.

According to the Vice President doing so would require alternative revenue sources and diversification of our economic structures in terms of the drivers of our economic activity and sources of foreign exchange, while hailing the Ministry of Transportation for initiating the SOPs and PSSPs, which are electronic-based monitoring which would now govern the entire port operations in the country.

By adopting the new technology-based monitoring, the ministry had set the nation on the path of enhancing its ports capacity of ensuring free flow of import and export, reducing corruption in port procedures and adopting the global best practice, Prof. Osinbajo said. He advised all port operators to support the new system for effectiveness of ports operations, increased revenue, enhancement of diversification programme of government and curbing corruption.

The Vice President observed that using technology-driven products is the way forward in enhancing service delivery in both private and public sectors. “Everyone in the private and public sector must invest their commitment in the successful implementation of the SOPs and PSSPs by following the procedure, not engaging in corrupt practices and putting an extra effort to ensure that the objectives are accomplished.

“We must understand and accept that nation-building is a collective responsibility and that the private sector has an important role to play in supporting every effort of government to achieve the building of a strong nation,’’ Osinbajo added.

He pledged the administration’s resolve to continue encouraging a competitive business environment characterized by sufficient and efficient policies to sustain economic growth to further retain and attract local and foreign investments in Nigeria.

Prof Osinbajo said that a key component of this administration’s change agenda lay in the development of a diversified non-oil economy adding that to achieve the target, the ports must play their role in making it easier to trade across borders as well as drive Nigeria’s trade policy.

The Vice President remarked that many countries in the world had proved that without natural resources, the efficient management of import and export activities could greatly improve national economies. “Many countries have proven that without depending on any natural resources, but simply relying on efficient procedures for undertaking Port activities, any nation can position itself as a major hub and can earn significant resources by just being more efficient,“ he noted.