Kachikwu Hands Over To Maikanti As New GMD 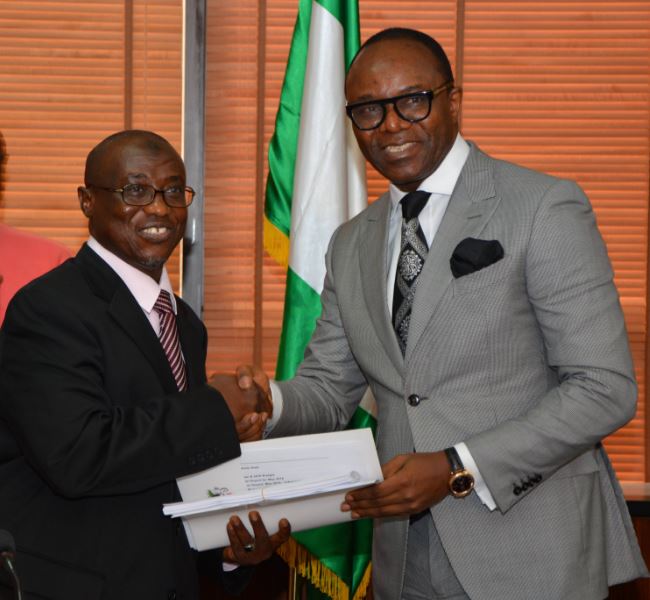 This was stated in a press release issued by  the Group General Manager (GGM), Group Public Affairs Division of the Corporation, Garba Deen Muhammad on Friday in Abuja.

The new GMD, also paid tribute to the Minister, Kachikwu for recommending him to the President for appointment as Group Managing Director of the Corporation.

Speaking at a brief but colourful hand-over ceremony at the NNPC Towers on Friday, Baru also pledged not to disappoint Mr. President for reposing so much confidence in him to head the Corporation.

Baru unfolded his 12-point agenda to include: Creating an all-inclusive internal advisory council on security comprising representatives from NNPC, the IOCs, the Unions and Security Operatives to brainstorm and address host community agitations to complement efforts of the Government Security Team; implementing the new business models and grant the needed autonomy to the strategic business units and autonomous business units; providing relevant directions and control that would ensure their growth and profitability, continuing to explore ways of relieving Government from the burden of cash calls obligation as well as address and defray the agreed cash call arrears of the IOCs and restore oil and gas production and grow the reserve portfolio.

Other areas the new GMD promised to focus on are: Increasing crude oil production by the Nigerian Petroleum Development Company, NPDC, reviewing all weak contractual agreements and terminate bad ones as appropriate, leveraging on equity positions to cause the development of key gas assets for both domestic and export as well as pursuing the expansion of gas network across the country, repairing and restoring oil and gas pipeline infrastructure as well as providing robust security system for both detection and deterrent in conjunction with the existing security arrangement.

He also promised to: improve refining efficiency of the four existing refineries to pave the way for future expansion, pursue diversification of businesses by refocusing on the implementation of Renewable Energy Programmes and Frontier Exploration Services, continue with the drive to make the venture businesses profitable and ensure service delivery, entrench the culture of professionalism by doing the right things at all times through transparency, accountability, and respect for all, ensure adequate staff welfare and motivation, training and capacity building.

“ We are indeed impressed with the positive accomplishments achieved so far, your vision for NNPC and the energy you brought into the sector all in an effort to reposition the oil and gas industry towards growth and profitability,’’ he said.

In his address, Kachikwu thanked Mr. President not just for the opportunity but for the foresight in making him serve first as GMD before appointing him as Minister of State for Petroleum Resources noting that the achievements so far recorded in the industry have given credence to the President’s foresight.

The Minister also extoled the virtues of the new GMD describing him as a thorough breed oil and gas professional.

Kachikwu listed the achievements recorded in the last eleven months under his leadership to include: Sanitization of the fuel supply and distribution matrix due to the introduction of the downstream liberalization regime, reduced upstream contracting period to nine months from initial upwards of two years and the redirection of the NNPC on the path of profitability as witnessed in the May 2016 NNPC Monthly financial report which posted a profit of =N=274 million.

Other achievements he spoke of  include: prompt remittance of oil proceeds to the Federation Accounts, monthly publication of NNPC Financial reports, review of old models contracts like crude SWAP which saved the Corporation a whopping $1Billion annually,

The Minister also informed that under his watch $80 billion MoU with Chinese investors was recently secured.