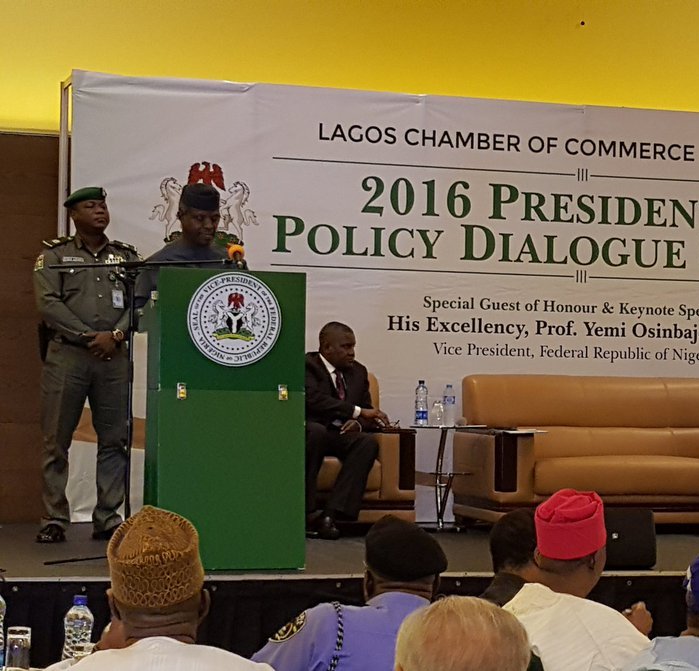 Vice President Prof. Yemi Osinbajo spoke during a press interview in Lagos after participating in the Lagos Chamber of Commerce and Industry’s Presidential Policy Dialogue on Thursday.

This was made known in a press release issued by the Senior Special Assistant-Media & Publicity to the Vice President, Laolu Akande on Monday in Abuja.

According to him, the Vice President said that Nigeria’s investment projections both foreign and local are very promising.

Below are excerpts from the interview in Q & A format:

Question: Are you seeing any early signs of investments coming anytime soon?

Vice President: Oh yes! For example, General Electric is about to make a very very significant investment in the country.

There are investments that are already coming in for railing stock for railways and obviously the reason why this is the case is because we’re doing two rail lines; the Calabar-Lagos rail line and the Lagos-Kano rail line.

So investments are  coming in for railing stock, there are many such investments that people are looking at, because really, when you look at it, this is a country of 170 million people and a very very vibrant economy for that matter.

So investments people certainly are looking at investing in the country. And this is so even in agriculture, there’s an initiative, a major Mexican company, in fact possibly their leading farmers, producers of agricultural produce from Mexico who has come in to Nigeria is already investing in 10 states, especially pineapples and bananas, vegetables and fruits.

I think the scope for investments is there, the appetite is there and I believe that what everyone is looking forward to is just signs that things are stabilizing, that the environment is one where there is governance and that there is consistency in the policy.

Q: How does foreign investments fit into the fiscal mix?

Vice President: Well let me say that first, both local and foreign investment is crucial in the turn around that we expect, we expect that deregulation and the flexible exchange rate would lead to an increase in the inflow of not just foreign direct investment but also portfolio investment.

We expect that that will happen, of course we’re not necessarily overly excited and enthusiastic about portfolio investment that we want to see, this is hot money and it will go and come.

But we are focused on ensuring that enduring investments, in the form of FDI (foreign direct investment) are coming.

But we are also focusing on local investment, some of the investments that we’re seeing, to mention a few: the Dangote Refinery, 650,000 barrel refinery, there’s the fertilizer plants, the Indorama one, the sorghum plant that is being done by Honeywell, there’s the 500-kilometre subsea pipeline that’s also a Dangote project, the gas pipeline.

All of these that i’ve mentioned should come on stream, we expect that this will be very very significant in terms of even changing the fiscal landscape.

The same as fertilizer which requires import, sorghum, and the various other things. So we think local investment is absolutely important and we’re supporting local investments with everything that is possible giving necessary incentives and all of that. Now, we also expect that with the flexible exchange rate just as I’ve said, obviously this will encourage foreign investments. Everyone knows that Nigeria is the next frontier for investment, there may be difficulties and complications here and there now, but I don’t doubt at all, I mean even going by what we see today many foreign investors are keenly interested in investing in the Nigerian market.