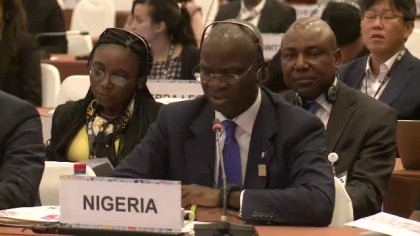 Let me join others to extend to you, Mr. President, our congratulations on your election. We are confident that with your wise guidance and support of members of the Bureau we will achieve the desired outcome at this landmark United Nations Conference on Housing and Sustainable Urban Development (Habitat lll)

Let me also express my delegation’s appreciation to the Government of Ecuador for the warm reception accorded us since our arrival in this beautiful cultural country, and our wonderful host city of Quito, as well as for the excellent arrangements put in place for our meeting. I equally convey very warm greetings and wishes from my President, Muhammadu Buhari whom I have the honor to represent here, for a successful outcome. We appreciate the excellent work of the Preparatory Committee in finalizing the New Urban Agenda on schedule for adoption by this Session.

Mr. President,
We stand today at a momentous milestone in our collective march towards a sustainable global future. Indeed, we have come a long way and experienced dramatic dynamics in urban life since the Habitat I Conference was convened in Vancouver in 1976, when for the first time we acknowledged the changing global demographic order and emerging urbanization challenges of the time. Two decades later in 1986 at the Habitat ll Conference in Istanbul, Turkey we adopted and committed to the Habitat Agenda as the strategic framework for tackling the challenges of urbanization, founded on the twin principles of ‘Adequate Shelter for All’ and ‘Sustainable Human Settlements Development in an Urbanizing World’.

Today, twenty years later, the ‘Urban future’ envisaged at the two earlier global conferences has become our reality in the world today, with more than half of the global population already living in cities. As rightly predicted, the urbanization rate has been rising fastest in Africa and the developing world. In my country, Nigeria, about half of the population now lives in urban centers, with the numbers continuing to rise. Expectedly, as our urban population’s increase, the problems associated with the expanding cities are also growing and begging for urgent attention. We know too well these issues and challenges which have been extensively discussed over the last three years during our preparatory process.

Nevertheless, the benefits and opportunities derivable from functional and sustainable urban centers are evident to us all. Our cities play a central role in our lives and are crucial engines of growth for the economy. They are concentrations of activity and places of connectivity, creativity, and innovation. They also offer a multiplier effect for the development of their surrounding areas. Urbanization can help to jump-start industrialization and manufacturing, which in turn can result in a host of other productive and economic development processes. The occurring rapid urbanization must, therefore, be exploited to unlock its economic potentials and provide a solution for rapid transformation of our urban centers.

This Habitat lll Conference presents this precise opportunity. It is for us a reminder, and a call to action on our obligations if our cities are to be properly positioned to play a meaningful role in achieving the targets of the 2030 Agenda for Sustainable Development and its Sustainable Development Goals (SDGs), as well as the Paris Agreement on Climate Change, and other internationally agreed instruments aimed at creating productive lives for the growing number of urban dwellers. Certainly, we owe humanity a responsibility to significantly step-up political commitments globally if we are to ensure a better quality of life – one that is dignified and productive – not only for all our citizens today but especially for the generations to come, for whom we are merely holding the earth in trust.

We must, therefore, take bold and decisive measures to implement the provisions of the New Urban Agenda at all levels, and mobilize commitments for institutional and attitudinal changes backed by innovative funding arrangements. Private Sector and development assistance must be tapped into, to provide capacity, finance, and technology to address in a comprehensive manner the critical challenges of homelessness, growing poverty, social exclusion, urban sprawl, lack of basic infrastructure and services, environmental degradation, increased vulnerability to disasters and the food and energy crises. Special provision must also be made for those with disabilities, women, and youth in our human settlements policies through programs and projects targeted at achieving equitable and efficient growth.

Mr. President,
Nigeria endorses the provisions of the New Urban Agenda with its strategic interventions to reverse these mentioned urban lapses/ills. We are currently one of the largest economies in Africa, blessed with significant natural and human resources, and with growing democratic institutions. The Administration, under the leadership of President Muhammadu Buhari, has demonstrated renewed political will to install a well-functioning urban system through the pursuance of efficient, transparent and accountable governance, including progressive economic reforms that are directed at creating jobs, reducing poverty and promoting stability – which are all essential elements to sustained growth and development.

To this end, our priority interventions have included among others, increased investments in affordable housing, modern road infrastructure, highways, bridges and robust, efficient transport networks. The National Housing and Urban Development Policies have been reviewed, with the incorporation of new development strategies for dealing with the pertinent issues of housing finance, climate change, resettlement, participatory governance, and better land management and administration.

Also, in order to remove the inhibitions and obstacles to the supply of affordable housing units, and to bridge the huge housing gap, we have recently embarked on developing a sustainable National Housing Programme, that will form the bedrock for aggressively reducing the housing deficit in Nigeria. Its critical features are:

(a) Responsiveness to the needs of the end users based on surveys, affordability analysis, and income differences;
(b) Responsiveness to cultural and climatic diversity;
(c) Responsiveness to local economic needs and focus on SMEs and cottage industries as drivers of building inputs like doors, windows, plumbing and electrical fittings; and
(d) Piloting and validating the concept by starting small with an N35 billion ($115million) to prove the concept.
As you may no doubt be aware, Nigeria has over the past 6-years also contended with a violent insurgency in its North-East region, which has resulted in the dislocation of many communities, with women and children most vulnerable; and led to extensive damage to public infrastructure and basic services. Our Government’s strategic response has included a comprehensive humanitarian response actively supported by the United Nations System and International Non-Governmental Organisations, as well as our local Civil Society Organisations, to whom we remain deeply grateful.

Towards the rehabilitation and reconstruction of areas affected by this insurgency and relocation of these displaced populations in their communities, an elaborate redevelopment plan is to be launched soon by our President, through the intervention of the Presidential Committee on the North-East Initiative (PCNEI) to meet the post-disaster demands.

Mr. President,
Despite the difficulties associated with the prevailing economic challenges which include the slowing GDP growth, high poverty rate, and infrastructure gap, the Government has recently been exploiting new sources of growth in agriculture, industrialization, telecommunications and services. Our economic diversification policies, coupled with improved fiscal management are translating into a significant decline in poverty levels, and bringing strong growth. The Nigerian Industrial Revolution Plan (NIRP) launched in 2012, provides a strategic and integrated Roadmap towards industrialization with an actionable plan across three sectors: agro-allied, solid minerals and oil and gas-related industries. Stronger public-private partnerships for roads, agriculture, and power are being developed to meet the overall national vision of promoting growth, creating jobs and generating wealth.

It is in furtherance of these, that Nigeria prepared its Habitat III National Report, and equally initiated and funded the development of a Common African Position for Habitat lll (CAPH3) under the auspices of the African Urban Agenda Project, in full partnership with African Governments, UN-Habitat, the AU and UNECA, as a strategy to revitalize African cities. We are indeed pleased to see that the essential elements of CAPH3 as endorsed by African Heads of States and Governments at the 27th Ordinary Assembly held in Kigali, Rwanda in May this year, are fully integrated into the New Urban Agenda. In this regard, I want to commend the support of my colleague African Ministers who worked diligently to bring this to fruition.

Mr. President, Excellencies, Ladies and Gentlemen,
On a final note, I cannot emphasize enough that the decisions we make here in Quito will have long-term consequences for cities, and their dwellers, as well as for the wider issues of human sustainability and the quality of life of future generations. We must collectively agree on the common principles that will guide our response to the challenges facing human settlements and ensure that we embark on a path of sustainable urbanization over the next two decades, as aptly captured in the New Urban Agenda. Similarly, we support the strengthening of UN-Habitat III as the focal point for its effective implementation and review.

Let me conclude by stating that the economic and health imperative to plan for people-centered societies and sustainable cities is no longer a luxury, but an increasingly urgent necessity if the 21st Century is to provide a secure and sustainable way of life for the growing global population. It will not be an easy task, neither will the turn-around come quickly, but we strongly believe that through strengthened political will and intelligent planning, we can improve the lives of millions with the New Urban Agenda as our blueprint and roadmap to a sustainable future.