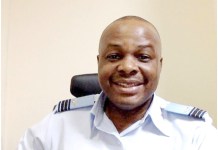 The West Africa Agricultural Productivity Program (WAAPP) says 1.8milions households across the country have benefited from its intervention since inception.

WAAPP’s Acting Coordinator, Mr Apochi made this known when he received a delegation of stakeholders in the agriculture sector in Abuja,

Mr Apochi said that, each beneficiaries of the project have reached seven non beneficiaries with information and knowledge about new technologies introduced by WAAPP.

“The project has reached over 1.8 millions households beneficiaries with project intervention with a spillover effect of one beneficiary reaching seven non beneficiaries.

“The first phase of WAAPP has recorded tremendous success that needs to be replicated and expanded”.

He said so far, nine new technologies, innovations and management practices were generated out of which four were adopted across national borders.

Mr Apochi added that 85percent of those reached were adopting and using the improved technologies.

He further emphasized that the project had produced 10,202 tones of improved foundation and certified seeds of maize, rice and sorghum with 1.3 millions tones of cutting cassava and 2.6 millions of yam seeds.

The Coordinator also explained that programme had financed short time training for 154 research staff of allied institutions, adding that seventeen research projects were currently being sponsored by WAAPP.

The leader of the delegation, Mr Noel Keyan, said they would partner with WAAPP in the development of agriculture in the country.

Kenyan said they had come to learn about WAAPP’s new technologies with a view to disseminate them to other stakeholders.

CATEGORIES Investment
TAGS Across The CountryWAAPP Intervention Reaches
Share This