At the invitation of the King, Salman Bin-Abdulaziz al-Saud of Saudi Arabia and that of the Ruler of Qatar, Shaikh Tamim Bin Hamad al-Thani, President Muhammadu Buhari undertook state visits to the two Middle-Eastern states between February 22nd and the 29th. 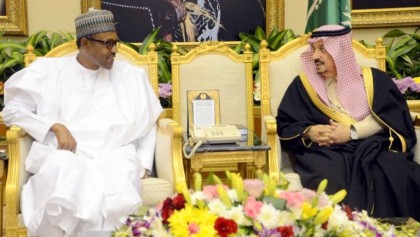 As expected, there is much healthy anxiety at home about the outcomes.

For many of our citizens,their expectation is for the benefits of these visits to reach them in Sokoto, Calabar, Owerri or Akure before the President got home after the engagements. There are good reasons for this anticipation.

The President had given impetus to and focus on foreign strategies to, as he put, overcome this country’s infrastructure deficit at a time when oil revenues had fallen by 70 percent.

This strategy draws from the enormous goodwill his election in 2015 has brought upon the country. Knowing how terrible things were for Nigeria in the past, the wold seems quite happy with us for having a president with an incredible reputation of personal integrity.

Considering our past missed opportunities, some have called this our last chance. The President calls it our best chance to shake off the shackles of poverty and underdevelopment.

He set out to achieve three to four broad objectives. One was of course to strengthen relations between these Arab states and Nigeria.

In his various speeches, the President made clear his wish to enhance the age-old relations between our nations and the various peoples of these nations built on the foundations of shared values and interests.

A matter for immediate concern to him was the wobbly state of the oil market and his inherent belief that he can rally the support of these two major oil and gas producing countries to support the return of a more stable market and better pricing.

“Why produce more, to earn less, instead of producing less to earn more?”was his constant refrain.

The President sought to persuade the Saudis and the Qatari to invest and cooperate in every Nigerian development priority, especially in the critical sectors of power, infrastructure, agriculture, mining and manufacturing.

As he did wherever he visited, he looked out for the Diasporas.

Nigerians jubilantly crowded the President’s meetings at both Riyadh and Doha. They spoke of their love for him and the work he is doing in the fighting corruption and terrorism.

The problems they have, which they brought to him were not new or different from what he had met elsewhere.

Nigerian professionals face enormous challenges getting visas for family members to join them abroad; there are difficulties getting passport renewals warranted by acute shortages of booklets and there are many grievances against frequent police arrest and sometimes deportation without the involvement or say-so of the Nigerian missions.

Nigerians in Saudi and Qatar want to vote from their current locations in our future national elections.

It is important that the President had obtained the nodding agreement of both countries to stand together for a more stable market and better pricing for oil and gas. Together, they agreed however, that more can be achieved by working together with independent producers outside the Organization of Oil Producing Countries, OPEC.

True to their word, the Saudis made a pronouncement on the issue and the market has positively responded, even if marginally so. Oil price is up by a few percentage points.

He has also obtained commitments of investment from the states, on the one hand through their enormously well-endowed Sovereign Wealth Fund(s) and on the other, from Saudi and Qatari industrialists committed to investing billions in the Nigerian economy.

The signed agreements with Qatar on the protection of investment and avoidance of multiple taxation is helpful in paving the way for the coming investments.

The other agreement on Bilateral Services Agreement, BASA bears the imprint of Nigeria’s ambition of transforming into the international travel hub for West-Africa’s 400 million people.

The Qatari Emir gave a prompt directive for support and collaboration with Nigeria on the plans to restart a national airline and a further development of airports infrastructure.

On security, the President made known the position of his administration to join the alliance of Islamic States against terror.

In an interview with the Qatar-based Aljazeerah TV, he made clear his intention to work everyone and anywhere to fight terrorism.

“We are victims of terrorism,” meaning we know the pain and we feel it and that misguided sentiment will not detract him from clear national interest.

The President conveyed condolences, on behalf of himself and the nation to King Salman, The Custodian of the Two Holy Mosques on the spate of deaths, including many Nigerians, in the course of last year’s Hajj pilgrimage.

He took note of the new concessions the Saudis have given Nigeria, among which is the increase in Umrah slots and asked the Ministry of Foreign Affairs and the National Hajj Commission, NAHCON to request for more Hajj slots. He equally wants to see Nigerians pay less for their Umrah.

Clearly, the President seemed impressed by the willingness on the part of the Saudis to discuss all outstanding issues with Nigeria. Our side to the continuing discussions have 17 consular and other matters connected to the Umrah and Hajj.

Determined to give meaning to his expressed determination to produce enough food for the teeming population, bridge the infrastructure gap and putting in place measures for the diversification of the economy now precariously over-dependent on oil, the President returned home with a promise to set up a cabinet committee to identify some protects of priority to the nation.

These priority projects, when identified will be evaluated and costed, and thereafter placed for the consideration of the sovereign wealth authorities of the two states. It is hoped that once the states lead the way, the private sector in both countries will come in tow.

With the President promising to provide all the necessary support, both the Saudi and Qatari Chambers of Commerce and Industry are expected to visit Abuja in the course of this year.

The Islamic Development Bank, IDB which met the President presented a dazzling array of opportunities to assist in mobilizing domestic and external resources to finance Nigeria’s investment program in the wake of widening funding gap.

The Bank has offered to support the Federal Ministry of Finance in mobilizing resources from Arab Countries through assistance in organizing an Arab Donor financing roundtable in Abuja. It will leverage its traditional partners in the Arab Coordination Group (such as the Saudi Fund, the Kuwait Fund, BADEA, the Abu Dhabi Fund, etc.) in order to increase the quantum of funding available to the country.

The IDB has equally offered assistance to the Government of Nigeria in facilitating a proposed Sukuk Bond issuance program, aimed at mobilizing domestic and external resources to finance Nigeria’s investment program. The Central Bank of Nigeria and the Debt Management Office are in a discussion with the IDB on this idea.

In another breath, the IDB Group is committing itself to helping to mobilize investments from private businesses in Arab countries to assist in the development of solid minerals and commercial agriculture.

In the meeting with the Organization of Islamic States, OIC, the President obtained assurances of support for the resettlement and rehabilitation of of the more than two million Internally Displaced Persons in various camps in the North-East.

In line with his observation that it is only by educating people properly about Islam that terrorists will be deprived of legitimacy and a basis for the recruitment of followers, the OIC accepted the President’s request to partner with Nigerians in bringing a good knowledge and understanding of the Islamic religion.

The above snapshot may not represent a 360-degree view of all the things that happened. For instance, the Qatari who are being sought after by nations eying their reserve funds had shown interest in Nigeria’s favorable demographics and infrastructure deficit. The low-hanging fruit was ignored because a past president refused to visit. President Buhari’s visit has deepened the enthusiasm of the Saudis and the Qatari in investing in Nigeria.

The most important challenge before him now is in packaging proposals acceptable to both sides, for business to start.