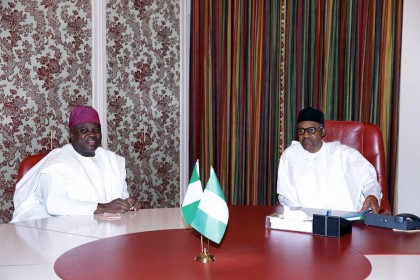 President Muhammadu Buhari has received the formal appreciation of the Lagos State Government for facilitating the two point five billion dollar agreement with the People’s Republic of China on the execution of the Metro Rail Transit Line project in the State.

The project agreement is one of those secured by Nigeria during the recent visit by President Muhammadu Buhari to the Asian Country as a result of which investments in excess of Six billion dollars were yielded in critical sectors of the economy.

Governor Akinwunmi Ambode who delivered the message of appreciation to the President at a closed door meeting said Lagos State has a lot benefit from the agreements signed in Beijing.

NEWER POSTIDPs To Get NYSC Medical Doctors, Nurses, Pharmacists and Other Medical Professionals
OLDER POSTRE:Disquiet In The War Front As Soldiers Complain of Unpaid Allowance