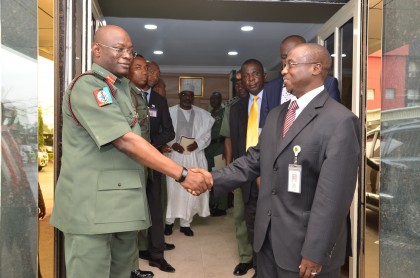 The Group Managing Director of the Nigerian National Petroleum Corporation, NNPC, Dr. Maikanti Baru on Thursday made a passionate appeal to the Nigerian military to help secure critical oil and gas infrastructure and curb the losses incurred by the Corporation due to the nefarious activities of pipeline vandals and oil thieves.
Dr. Baru who led a strong delegation of NNPC Top Management on a courtesy call on the Chief of Defence Staff, General Gabriel Olonishakin at the Defence Headquarters, Abuja, disclosed that from January to May this year, almost 1,447cases of pipeline hacking was recorded resulting to a loss of 109 million litres of petrol and 560,000 barrels of crude oil to refineries posing a great threat to the nation’s economy and the 2016 federal budget.
Gen. Olonishakin in his response said that the Defence Headquarters and the armed forces are duty bound to support and provide the NNPC with all necessary security support because of its strategic role in ensuring the economic survival of the nation.
Throwing more light on the episodes of pipeline vandalism, the NNPC GMD stated that over 3000 vandalism incidents were recorded every year from 2010-2015. In 2015 alone, pipeline losses of PMS volume of over 643 million litres valued at over N51.28 billion was incurred.
“The 2016 National budget plan was based on 2.2 million barrels per day of crude oil production. However, the budget plan is now grossly impacted due to renewed militancy: with about 700, 000 bpd of oil production curtailed due to pipeline vandalism,’’ he said.
The NNPC GMD noted that domestic natural gas supply to power is equally impacted with estimated drop of about 50 percent from 1400 million standard cubic feet of gas per day, mmscfd to barely 700mmscfd resulting to significant power outage exposure of between 2500MW to 3000 MW as a result of direct and indirect impact.
“Along with this menace is the incessant case of kidnapping of personnel and piracy in areas of operations. Other impacts of these despicable acts include loss of lives, high cost of operations, refinery shut down, fuel crisis and large scale environmental degradation and attendant cost of oil spill clean-ups,’’ he said.
While thanking the Chief of Defence Staff for the laudable and timely creation of Operation Delta Safe and the subsequent appointment of Rear Admiral Okojie as the Commander, Dr. Baru called on the CDS to provide support for the NNPC for re-entry into the Chad basin and Benue trough for resumption of exploration and drilling activities.
He pledged that under his watch as GMD, NNPC is committed to collaborating with CDS and other Government Security Agencies to emplace lasting solution to eliminate the hemorrhage of losses, revenue deferments and energy security threats.
The CDS acceded to the request by the GMD for the DHQ to facilitate and sustain the deployment of relevant military personnel; to critical oil and gas locations as the need arises.
On the request for military support to enable the resumption of exploration activities in the Chad Basin, Gen. Olonishakin explained that the exploration activities will remain on hold until the military concludes ongoing campaign by the Multi-national Joint Task Force designed to cleanse the environment of the activities of insurgents.
He said that the ongoing operation “Gaba Aiki ‘’ which translates in Hausa to completing a task, is designed to provide the much needed safe environment for the resumption of exploration activities in the troubled area.
The CDS pledged the readiness of the DHQ to collaborate with the NNPC in exploring the use of apt technologies and innovative ideas in tackling the various security challenges.
He congratulated the GMD on his appointment and assured him of the readiness of the security agencies to provide adequate security for all oil and gas installations across the country.