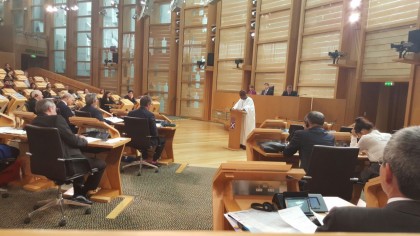 Segun Adeyemi, Abuja: The Minister of Information and Culture, Alhaji Lai Mohammed, has called on international investors to invest massively in Nigeria’s creative sector ”as the non-oil export alternative for economic growth and development”.

The Minister made the call while addressing the plenary session at the ongoing 2016 Edinburgh International Festival Summit in Scotland on Thursday.

”With approximately 24 million TV households, 150 TV channels, a greater number of radio stations, smart phone penetration edging over 40 million and over 100 million phone lines sold to date, and with over 20 million Diaspora Nigerians who are all primary consumers of the creativity located all over the world, and with us being the commercial bed rock of the last frontier, Africa, we are ready for business,” he said.

He noted, however, that the nation is ready to tackle the challenge by working with its partners, including the Tony Elumelu Foundation and the British Council, to build capacity and provide knowledge.

He announced Nigeria’s intention to preserve its cultural heritage by reviving a number of its festivals that have not been held regularly over the years, including the Argugun Fishing Festival and Durbar, and also bringing back the various age-long traditional games like ‘ayo’, ‘arin’ and traditional wrestling.

Alhaji Mohammed told the summit, which is being attended by representatives of many countries, that the present Administration had resolved, even before knowing the price of oil was going to crash, that it would diversify its economy

He said apart from agriculture and solid minerals, the country will be focusing on the creative industries ”because it is a major low-hanging fruit” which is ready to be plucked immediately.

”We are simply not awake to the fact that our cultural resources offer more lucrative alternatives to our oil deposits in the form of income derivable from entrance fees to facilities and exhibitions, copyright charges for reproduction and use of collected rare objects, photographs and visual images, enquiry charges, sale of publications, publicity materials and promotion licensing agreements to mention a few.

”We need to be alert to harvest our many distinctive tangible and intangible cultural resources,” Alhaji Mohammed said, adding that Nigeria is opening opportunities to boost tourism and the hospitality business through well-organized national and international carnivals and festivals.