The Minister of Information and Culture, Alhaji Lai Mohammed, has
called for the strengthening of bilateral ties between Nigeria and
Sudan in the areas of cultural/creative industry and digital economy
in order to boost the efforts of the two countries to diversify their
economies away from oil.

The Minister made the call in Abuja on Tuesday when he received the
Sudanese Ambassador to Nigeria, Mr. Ibrahim Bushra, on a courtesy
visit to his office.

“Let’s take the opportunity to look at two areas where the two
countries can work together. One is the area of creative and cultural
industry; another is the area of digital economy. Today any country
that does not see and recognize digital economy is like a man winking
in the dark….. Today if you have an identity and a name and you have
no digital identity it’s as if you do not exist. So we want to see how
the two countries can cooperate in both the cultural/creative industry
and also the digital economy,” he said.

Alhaji Mohammed described cultural/creative industry as the economy of
the future because of its huge potential to create wealth, generate
employment, especially for the youth, and foster cooperation among the
nations of the world.

“To me the economy of the future is the creative and cultural industry
which does not come with the headache of oil. I can say this because
my country and your country have suffered from the same problems
related to oil production. On the contrary, when an economy is built
on the creative and cultural industry, it engenders more
understanding, breeds cooperation and friendship and at the same time
brings in more money,” he said.

The Minister therefore stressed the need to expand the frontiers of
economic cooperation beyond buying and selling of commodities and
machinery to the broader aspect of creative and cultural exchanges for
citizens’ empowerment and economic recovery, particularly among
countries suffering from the crash in the price of crude oil. 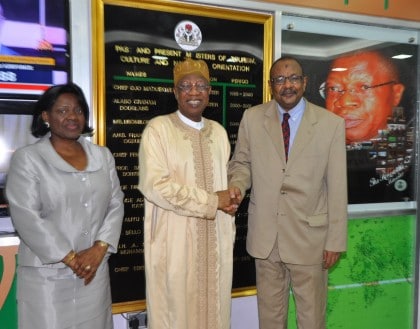 Alhaji Mohammed offered to partner with Sudan in the area of capacity
building in the film industry, especially Kannywood where there are
cultural similarities between the two countries, music as well as
arts.

In his remarks, Ambassador Bushra said in spite of the geographical
distance, the two countries enjoy a long history of kinship and blood
relationship, saying there are about five million Nigerians currently
residing in Sudan.

“I always cite a very good example which is a Sudanese Singer, Aisha
Musa, In Sudan she is known as Aisha elFelelatiya. She was born from
Nigerian parents in 1917 and she was one of the most famous singers in
the music history of Sudan. There are many Sudanese of Nigerian
origin. They are ministers, governors and businessmen and they are
contributing with their brothers in building Sudan,” he said.

He said despite the historic relationship between Nigeria and Sudan,
more needs to be done in the area of economic cooperation for the
benefits of the two countries.

The Ambassador expressed his willingness, if invited, to bring a Sudanese
Musical Group to participate in the 2016 Abuja Carnival.