President Buhari To Transform Tenants To Proud Owners of Houses 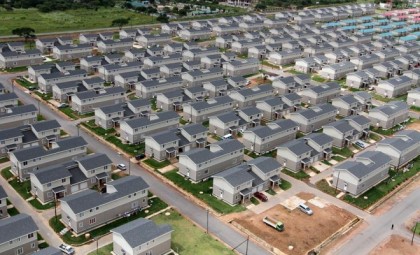 President Buhari will soon introduce an affordable housing scheme that will transform thousands of Nigerian tenants to proud owners of houses and plots of land.

Garba Shehu said the scheme will operate through the mortgage banking system as part of the programmes meant to uplift the quality of lives of the Nigerian citizens.

Shehu said that the Buhari-led administration had so far released N74 billion as part of capital allocations in the last three months.

“Most of our road contractors had not been paid since 2012, many of them had sent their workers away adding to the unemployment problem.

“This government has released capital allocations in the last three months that is more than the whole of 2015.

“In 2015 Nigeria spent a paltry N19 billion on roads, in three months we have spent N74 billion and we are already releasing more.” Shehu said.

Shehu said, “no government has ever considered the poor like this one. Under the current budget, the administration devoted N500 billion for social intervention programmes for those who need and deserve support.

He said that the Buhari-led administration had so far released N74b as part of capital allocations in the last three months.

According to the senior special adviser to the President on media and publicity, more of the capital allocations will soon be released to revitalise the economy.