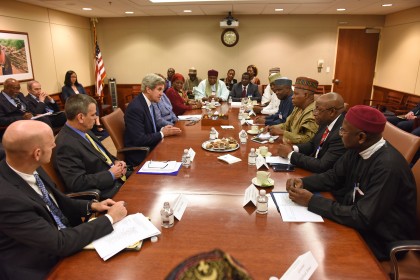 Ten Governors from Northern States in Nigeria where on Wednesday ‎hosted at the White House, America’s seat of power in Washington, during which they held closed door meeting with President Barack Obama’s National Security Advisor, Ambassador Susan Rice. The Governors, led by Borno State Governor and chairman of the Northern States Governors ’ Forum, also held closed door meeting with U.S Secretary of State, John Kerry at the State department, also in Washington. The Governors also held meeting with Gayle Smith, madam administrator of the multi million dollars United States Agency for International Development (USAID). The meeting held at the Ronald Reagan building, headquarters of humanitarian and development Agency in Washington.

The symposium which focuses on addressing conflicts and under-development in Northern Nigeria is a follow up on an earlier one hosted in March, 2014 under the Goodluck Jonathan administration when the United States invited Northern ‎Governors for a security symposium which dwelt on finding solutions to the Boko Haram insurgency and it’s spread from the northeast to other parts of Northern Nigeria.

‎Scheduled to end on Thursday, the symposium has had different panels of discussant including top U.S Government officials, the Governors, development experts from Nigeria and the United States who worked together to identify areas of expanding collaboration to improve the “pervasive poverty, acute girl-child education, maternal and infant mortality” amongst other key under-development elements more prevalent in Northern Nigeria in comparison with the rest of the country.

Speaking through Governor Kashim Shettima, the Northern Governors had on the first day of the symposium demanded practical benefits of their invitation, noting that traveling to Washington at a time of recession was a tough choice they made with high expectations.

The first day had two panel discussions on “Conflict Drivers and Opportunities for Stabilization in Northern Nigeria” and also Rehabilitation, Reconciliation and Reconstruction” of communities destroyed by Boko Haram insurgents in different parts of Northern Nigeria.