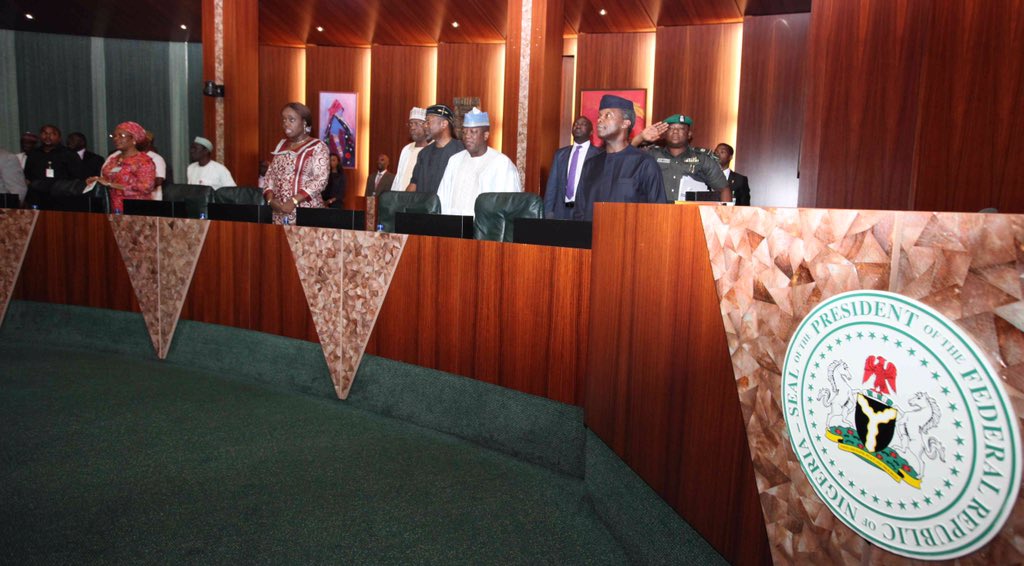 In support of the Buhari administration’s effort to diversify and deepen the nation’s revenue profile, state governors as members of the National Economic Council, NEC, have endorsed the Federal Government’s plan to increase the contribution of the solid minerals sector to the nation’s treasury.

This was stated in a press release made available to the media by the Senior Special Assistant to the Vice President, Laolu Akande on Tuesday.

Following a presentation to the Council today by the Minister of Mines and Steel Development, Dr. Kayode Fayemi, the Governors also approved the appointment of professional revenue consultants to achieve this goal.

NEC also supported a presentation from the Minister of Power, Works, and Housing, Mr. Babatunde Fashola on the Ministry’s strategy to generate incremental power as a short-term measure towards addressing current energy shortage in the country.

Below are Other highlights of Council meeting today are as follows:
Report On Excess Crude Proceeds

Minister of Finance reported that the balance of the ECA for the month of October 2016 stood at $2.4 billion.

The Honourable Minister of Finance also reported to Council that disbursement of the Budget Support facility is still ongoing to 35 States.
Presentation: Memorandum On Allocation Of Land For The National Housing Programme

The Honourable Minister of Power, Works and Housing gave an update to the Council as follows:

In response to the discussion on the proposal, the Minister noted that the Ministry will collaborate with State Governments on the implementation and design of the Housing Programme
Presentation: Policy Paper On Plans For Emergency Power Supply By The Honourable Minister Of Power, Works And Housing

Government’s plan is to deliver incremental, stable, and then uninterrupted power to homes and businesses in stages

One problem with the power sector is that there is not enough power to go round.  So the government will systematically and decisively deal with the immediate task to harness incremental power from all available sources.DISCOS were authorised in February this year, to partner with private industry that had idle generation capacity from its captive power station, to add 400 MW of embedded generation that would otherwise have been unused or underutilized.

DISCOS were authorised in February this year, to partner with private industry that had idle generation capacity from its captive power station, to add 400 MW of embedded generation that would otherwise have been unused or underutilized.

DISCOS are encouraged to harness the estimated capacity of over 2,000 MW of unused/underutilized industrial/commercial generators fueled by gas, oil and diesel that can be harvested.

Such initiatives of harnessing such capacity to serve working target consumers are now progressing towards the conclusion in Port Harcourt, Benin, Kaduna, Yola, Jos, Enugu, Ibadan, Ikeja and Eko distribution franchises with the active support of the Ministry.

Locating generation capacity close to the consumers is an effective way to deliver incremental power to rural communities were most Nigerians live, many without any electricity supply

The Ministry is encouraging, facilitating, enabling and directly investing in the new power station on the grid and removal of important transmission constraints to deliver incremental power.

Others are: Ministry driving Niger Delta Power Holding Company Ltd and TCN to complete all transmission projects around and connected to Ikot-Ekpene Switch Yard.  The project will add 900 MW of incremental power from already built capacity at Alaoji, Calabar and Ibom power and

The project will add 900 MW of incremental power from already built capacity at Alaoji, Calabar and Ibom power and Afam III power stations to the national grid.

It was recommended that the Minister organise a forum where DISCOS, GENCOS, NERC and State Governments will interact to create common awareness of the challenges in the power sector.

Presentation Of Memorandum For Approval For The Engagement Of Independent Professional Consultants To Increase The Contribution Of Solid Minerals Sector To The Revenue Of The Federation.

The importance of the memo was to support the government’s diversification drive for the country’s economy and revenue base.

NEC had also in May 2016 resolved on the need to forge a strong partnership between the States and the FG on the role of the mining sector in the diversification agenda.

The imperative of the memo, therefore, arose after a comprehensive review of the revenue generation profile of the mining sector and the need to plug avoidable revenue leakages, which occur due to the inadequacies inherent in the existing revenue collection systems.

NEITI estimated total revenue from the mining sector at N31.449 billion and N50.2 billion in 2012 and 2013 respectively out of which only N1.9 billion and N2.01 billion respectively were remitted as Royalties to the FG.  In addition, there were no records of royalty payment of as much as estimated billions of Naira worth from Gold, Precious Stone, Barites and other exported solid minerals

The memo, therefore, became necessary now considering the economy downturn in the oil and gas industry, which has hitherto been the nation’s main source of revenue.

Council approved the engagement of Independent Professional Revenue Consultant to increase the contribution of Solid Minerals sector to the FG, but with the condition that the Ministry should negotiate a threshold with the Consultants on their professional consultation fees.

He told Council that Government is meeting targets in rice production, but that high importation is threatening production capacity of our farmers

Government plans to reform Bank of Agriculture so as to be able to give loans to farmers on single digit rates.

There are plans to re-launch Cashew production and introduction of a new variety of Shea butter that can mature in five years instead of 25 years.

He explained the threat of importation of tomatoes and frozen chickens to the health of Nigerians.

Council also commended the Edo State Governor Adams Oshiomhole him for his service as a member in the last 8 years.

Tuesday’s National Economic Council meeting is the governor’s last  attendance. He received a standing ovation from members of the council.

The Out-going Governor commended the leadership of the President, and also the Vice President as Chairman of the Council, especially for his commitment to the states.