The Minister of budget and National Planning, Senator Udoma Udo Udoma has appealed to the African Development Bank to fast track the 1billion dollars loan facility it promised the country as support for the 2016 budget. The loan is expected to cover the 35 percent shortfall in the 2016 budget. 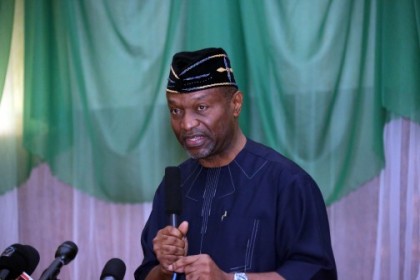 While giving overview of the government’s plan to reflate the economy and spend out of the recession, the minister said that government is trying to contain the militancy in the Niger –Delta which has affected oil production in the country, hoping to restore production to 2.2 million barrels a day at the end of the year.

He also stated that government is committing money into infrastructure development, processing of export zones, and also providing loans through the Central Bank of Nigeria (CBN) at a single digit to support farming in Nigeria.

According to the Minister, the economic recovery plan is designed to consolidate and harmonize all the sectoral plans in a single document and set out in broad detail an integrated roadmap for the growth and sustainability of the country’s economy, and is also a part of the commitment the federal government made with Nigerians, whether there was a recession or not.

Speaking also at the meeting, the Director-General of the Budget Office, Mr. Ben Akabueze said that what the government is doing differently concerning budget releases, is that it has shifted from the old practice of releasing monies quarterly but on specific request which are tied to projects.

Mr.Akabueze said that so far over 750 billion has been released for capital projects.