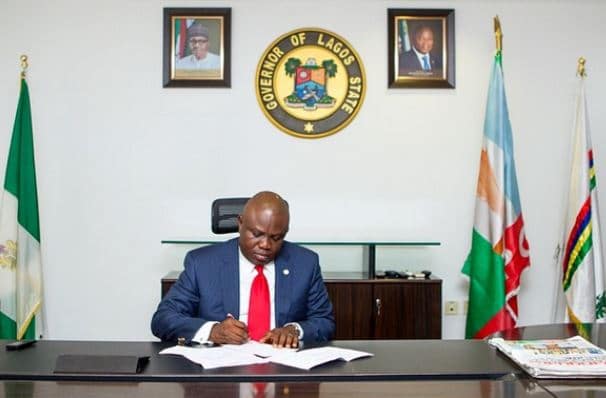 Gov. Akinwunmi Ambode of Lagos State says the 2017 Lagos International Trade Fair (LITF) will be an avenue for collaboration toward enhancing economic growth.

Ambode, represented by Dr Idiat Adebule, Deputy Governor of Lagos State, made the remark on Friday, at the opening of the fair with the theme: “Promoting Industrialisation for Economic Recovery and Sustainable Growth.”

The News Agency of Nigeria (NAN) reports that the fair is an annual event organised by the Lagos Chamber of Commerce and Industry (LCCI).

Ambode noted that the previous edition of the event was held amid economic recession, but now, the economy had not only exited recession, but had received positive global rating.

According to him, the rating has shown an improvement in the country’s Ease of Doing Business ranking of the World Bank.

“This positive development is the cumulative effect of policies and reforms being implemented diligently to ensure a conducive environment for business growth and development,” he said.

The governor said the large turnout of participants, networking events and volume of transactions recorded yearly are testaments of the trade fair’s relevance in boosting national economic growth and recovery plans.

In her comments, Mrs Nike Akande, President of LCCI, said that the theme of the fair was to underscore the critical importance of industrialisation in the nation’s economic recovery and diversification process.

She said that it would also draw attention to the imperative of creating an enabling environment to attract new investments, grow existing ones and the necessity to build a sustainable economy.

“There is perhaps no better time to do this than now. This is the time to focus more on the non-oil sector for diversification.

“The non-oil economy is more inclusive and integrated. It is also more growth-oriented, characterised by high economic linkages, stable, and above all, more sustainable,” she said.

According to her, appreciating the dynamics of the economy will enable government to construct policies that will ensure sustainable economic development.

Akande said that government’s priority should be to fix impediments to productivity and competitiveness in the economy.

She said that tackling the constraints would encourage domestic investment, attract foreign capital and facilitate the realisation of the objectives of the Economic Recovery and Growth Plan (ERGP) of the government.

Chief Alaba Lawson, President, Nigerian Association of Chambers of Commerce, Industry, Mines and Agriculture (NACCIMA), urged the government to implement infrastructural development measures, toward improving all sectors of the economy.

She said that doing this would make the country take its rightful position as not only one of the largest economies in Africa, but also the most industrialised one.

NAN reports that the 31st edition of the Lagos International Trade Fair ends on Nov. 12.