Dr Akinwumi Adesina, President, African Development Bank (AfDB), says the bank would invest 12 billion dollars
in the power sector in Africa in four years with the goal of leveraging on the aviation sector. 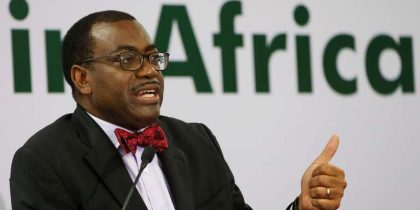 He said this while speaking with the News Agency of Nigeria (NAN) in Abuja.

Adesina said the aviation sector was very important to the continent but that it could not operate in the dark.

He said the sector was very important to Africa because it accounted for about 73 billion dollars in Gross Domestic Product (GDP) and created about 7 million jobs across the continent.

”Without electricity, you really cannot operate any effective and efficient airline industry and so this is one of the top priorities of the bank.

“So we must fast track that and when we have electricity, everything functions, even for the aviation industry and the tourism industry is actually quite linked to the avaiation industry as well.”

He said the bank had invested over 20 billion dollars on infrastructure in Africa in the last 10 years, specifically one
billion dollars in the aviation sector.

Adesina said the bank’s investment in the sector covered building new airports in Ghana, Senegal, Casablanca and building of new infrastructure in Morocco.

“But one of the biggest problems in Africa is we do not have any aircraft leasing facilities and that is one of the things that the government is looking at.

“We are looking at upgrading some of the navigational infrastructure.

“So as a bank, we are very strong supporters of the government.

“Once the government comes up with its plan and what that really means in terms of the need, then we can play the role that they are asking us to play but we do not make decisions for the government.”

AfDB is a multilateral development finance institution aimed at fighting poverty and improving the living conditions on the African continent.

It does this by promoting the investment of public and private capital in projects and programmes that are likely to contribute to the economic and social development of the region. (NAN)