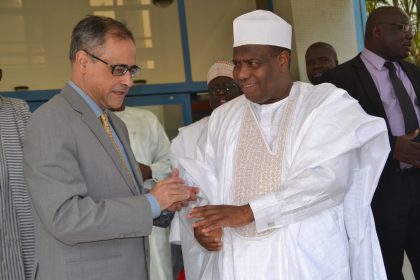 The World Bank and Sokoto State Government have agreed to expand areas of mutual cooperation for development and poverty alleviation in the state.

Malam Imam Imam, the Spokesman to Gov. Aminu Tambuwal, said in a statement on Tuesday in Sokoto that the development was an outcome of a meeting between the governor and the World Bank Country Director, Mr. Rachid Messaoud, in Abuja.

He quoted Tambuwal as saying that his administration had paid all counterpart funding for various projects to be executed jointly by the bank and the state government.

“We have a number of projects we are implementing jointly in critical sectors like irrigation, water management, repairs of dam, health, education and others.

“We have discussed on ways we can hasten up implementation and I am happy with the response we got from the World Bank team.

“Importantly, we have agreed to expand the areas of our cooperation in livestock development, administration and fiscal reform, among others,” Tambuwal said.

Iman said that the country director had commended the state government for its commitment to full implementation of the various agreements signed by the two entities.

“The commitment shown by Sokoto Government is commendable and reassuring.

“We are delighted by what has been achieved so far and we hope to create a better future together for the people of Sokoto and Nigeria,” the country director said.

The World Bank and Sokoto government are partnering in critical sectors such as irrigation and drainage, education, rural and inter-urban roads development, water supply, sanitation, waste management and health. (NAN)