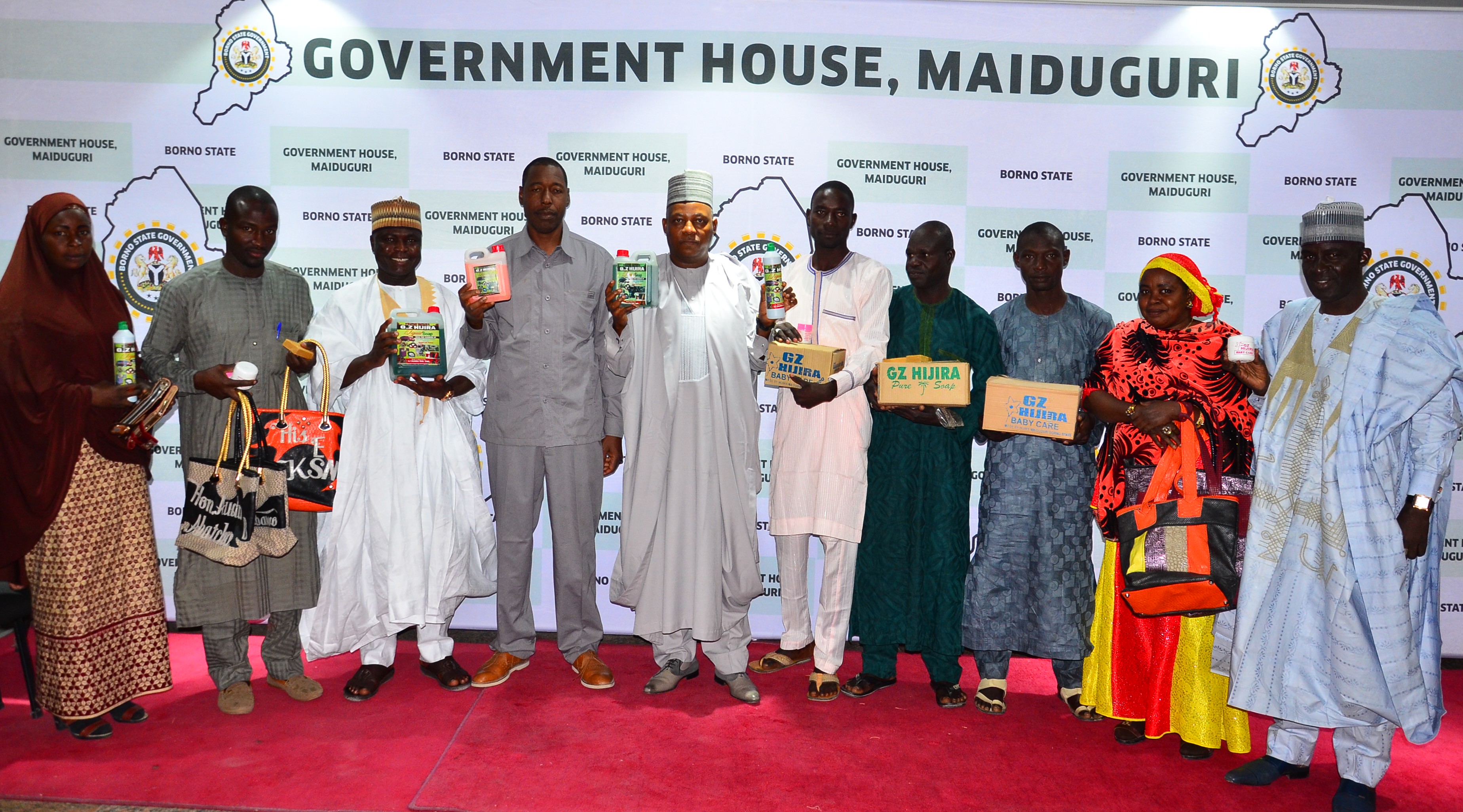 Some Intern‎ally Displaced Persons from Gwoza local government area of Borno State have began large scale production and packaging of various household products that include solid and liquid soap, detergents, pomade, hand bags courtesy of loan allocated to them by the Borno Renaissance Micro Finance Bank, set up by Governor Kashim Shettima to promote entrepreneurship in the State.

In 2016, Governor Shettima had after examining their proposal, directed the Micro Finance Bank to release the sum of N5m to a group of Ninety one (91) male and female citizens displaced from Gwoza local government area who were living within some camps in Maiduguri.

After preliminary meeting with Governor Shettima, the group had registered with the State as Gwoza Soap Makers Association, a cooperative desired to go into mass production of household items.

The Governor had before facilitating the release of the funds, promised to make them grow in capacity if they start on a good footing.

In fulfillment of their pledge, after days of hard work, representatives of the IDP’S led Borno State Commissioner for Higher Education, Usman Jaha, who hails from Gwoza, ‎were at the Government House, Maiduguri today (Wednesday) with samples of household products produced and packaged by the IDP’s.

They named all their products, ‘G.Z. Hijira’. The ‘G.Z’ represent Gwoza (their town) with Hijira meaning ‘temporary relocation’ which in their case represent Internal displacement.

The IDP’S told Governor Shettima that they want their locally produced products to capture the memory of their displacement and relocation to Maiduguri as a result of attacks on their communities in Gwoza by Boko Haram insurgents in 2014.

“We will be going into bigger scale production but we came to show you what we have started doing since you created this opportunity for us by encouraging us and getting us the money”.

Impressed by what he saw, Governor ‎Shettima immediately said that after their products are certified by control agencies, their products will become major features in public hospitals, schools and other Government establishments so as to increase their capacity and the economy of the State and to encourage other IDP’S and residents to become productive.

“You have just made my day. This is the kind of progress I love to see. You are all internally displaced persons but rather than fold your arms and wait for aide, you chose to be productive using your talents.” Shettima said.

The Governor promised that by the grace of God, after certification of the products by NAFDAC and the Standard Organisation of Nigeria (SON), the state government will arrange for a public presentation of your products.

“I will lead the launching and the Borno State Government will make you primary suppliers of soap, detergents and disinfectants in most of our hospitals, schools and other Government establishment including this Government House so that you create jobs for others that will market and sell your products.” He said.

Shettima also promised to get you some machineries that will make their production faster and in higher numbers.

The Governor directed the State Commissioners for Education and Health to commence preliminary discussions with the IDP’s for needs assessments of their products taking into cognizance the priority of supporting them to produce more and create jobs for other citizens they will engage in marketing, whole and retail sales as well as accounting.