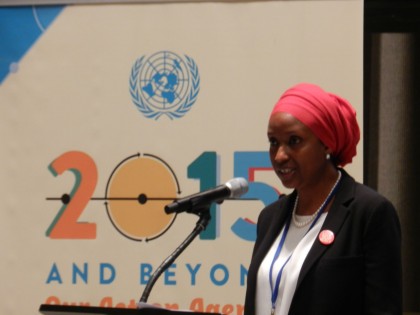 The Managing Director Nigerian Ports Authority (NPA), Hadiza Bala Usman has reaffirmed Management’s determination and commitment in assiduously collaborating with relevant agencies from all sectors of economy in order to harness effectively the desirables aimed at impacting most importantly on the nation’s economy particularly concerning socio-economic growth. This she said would “enable us take our place of pride in the comity of nations.

She was speaking when she played host to a delegation from the College of Deans of Engineering, led by Engineer Professor .E.A. Ajav who were on a working visit to the Corporate Headquarters of the NPA.

Represented by the Executive Director, Engineering and Technical Services of the Organization, Prof. Idris Abubakar, the MD’s in her opening remarks stated that the NPA was willing to support the group’s laudable programme through the corporate sponsorship of its forthcoming International Engineering Competition amongst Universities across the country. This she buttressed is aimed at “boosting the intellectual development of interns in all fields” of engineering.  In her words ‘’ The Engineering Profession is a discipline that serves as the bedrock of a nations development and efforts should be geared at maximizing the potentials at all times’’.

She further informed stakeholders that the NPA Management would be willing to collaborate and exhibit a smooth synergy with institutions in the area of manpower development regularly. According to her, a window would soon be created through which the top echelon of the Organization’s engineers would share experiences and expertise acquired over the years through this”. She was of the view that this would go a long way towards bridging the gap between the tertiary institutions and the Industry at large.

Earlier in his opening remarks, Chairman of the group, Professor E.A. Ajav affirmed that his team was at the NPA headquarters to appreciate the organizations support and resolve concerning capacity development over time through sponsorship and collaboration.

On the issue of the upcoming programme for engineering interns across the Nigerian Universities, the Chairman stated that the first edition held in 2016 was quite a success in terms of the positive impact on the student’s performances. He affirmed that this has further propelled the body to organize this year’s edition and plan towards sustainability.

The 2017 edition would herald three best students from each zone who would then proceed for the final event to determine the best University in the country. The breakdown cuts across higher institutions in all the geo political locations of the country.

Professor Idris Abubakar led the NPA team which included General Managers Engineers Jatto .A. Adams, Maintenance, Peter Obinomen Capital projects and  Mohammed .A. Rufai  Physical Planning and Development whilst  on the side of the Engineers were Professors O.B. Oloche, Treasurer and Mohammed .S. Public Relations Officer.