Kaduna State Government, says it will require up to 65.5 billion dollars to address the state’s infrastructure challenges over the next 30 years. 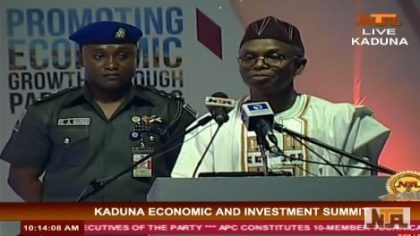 Gov. Nasiru El-Rufa’i stated this on Wednesday at the unveiling of the infrastructure master plan, 2018-2050, during the 3rd edition of the state investment forum in Kaduna.

He stressed that the long term infrastructure master plan summarised the infrastructure target of the state aimed at providing job opportunities and making lives better for the people.

“The breakdown of the future infrastructural developments between now to 2050, include, the transportation sector which would require N8 trillion while N5.1 billion would be required annually in the education sector to build about 9,006 schools including tertiary institutions.

“Other sectors include, the health system which would require N158 billion, while N100 billion yearly is targeted for the water sector; agriculture would require N53 billion, and 5,000 housing units would be developed annually all within the time frame of 2018-2050,’’ the governor said.

According to him, the administration had attracted investments into the state in the last two years, with 79 percent coming from outside the country.

According to the governor, “to encourage domestic investment in the state, government’s first priority is to build human capital by engaging in different activities where the young people are willing to be employed in businesses.’’

El-Rufa’i disclosed that the government expects that some of the investments would bear fruits before the next edition of the summit.