Vice President Yemi Osinbajo, on Thursday, reiterated the commitment of the Federal Government to create an atmosphere conducive for small businesses, market women, and artisans to do businesses successfully. 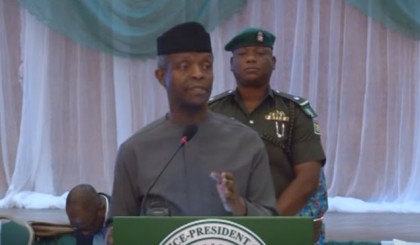 He explained that in the last two years, the Federal Government had demonstrated an abiding commitment to facilitating genuine efforts by all states to attract investment, diversify the economic base and create jobs and economic opportunities for the people.

He further said MSME’S were pivotal to the country’s development and restated the commitment of the Federal Government to give financial support to MSME’S across the country.

“MSME’s have tended to be neglected in the country over the years as a result of the competing priorities as well as the tendency to discount their contribution to the nation’s economy.

“As individual units, small businesses may appear to be small, but together they account for as much as 50 percent of Nigeria’s GDP and over 80 percent of our labor force.

“Clearly, they are an important part of the national economy and they should be treated as such, moreover, now that it has become inevitable for us to look inwards to become a country that is able to grow what we eat and produce what we consume.

“The MSME’s were designed to bring government closer to the people by assembling in one place, all the regulatory agencies whose work affects the business experience of small and medium scale businesses,” he said.

The vice president further said that the Federal Government was fully committed to working with the Ondo State Government to ensure that their potentials were fully exploited for a better life for all who live and work in the state.

Earlier, Gov. Oluwarotimi Akeredolu of Ondo State, pledged on behalf of his administration and the people, to create the right environment to support the MSMEs programme to achieve the set objectives.

He said the programme further underscored the determination of the Federal Government to drive the nation’s economy towards self-reliance, using the platform as a delivery tool for development.

“This programme anticipates lifting the generality of our people from the shackles of poverty and underdevelopment.

“Launched early last year by the Vice President, this programme aims at creating a platform for Micro, Small and Medium Enterprises (MSME).

“It aims to thrive by providing the opportunity for them to interact with relevant Federal Agencies and in the process, obtain practical and on-the-spot solutions to their business challenges,” he said.