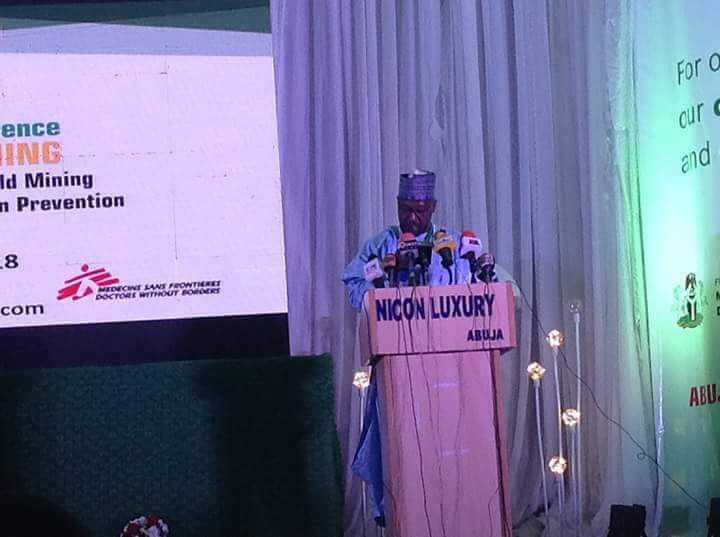 Jibrin Ndace, Minna: Niger State Governor, Alhaji Abubakar Sani-Bello has called for multi-sectorial support and proactive measures to bring an end to the menace of lead poisoning in the state and the country at large.
Governor Sani-Bello made the call on Tuesday in Abuja at the opening of the 2nd International Conference on Lead Poisoning Associated with Artisanal Gold Mining in Nigeria.

“It is important that we reinforce our determination to change the behavioural pattern of artisanal gold miners to understand the avoidable risks they put themselves and their families into using the unsafe mining practices”.

He said “the incidence of lead poisoning outbreak in the state in April 2015 in Unguwan Kawo and Unguwan Magiro of Shika community in Rafi Local Government Area of the state was devastating and it taught us many lessons.”

Governor Sani-Bello however disclosed that after the incidence the state government has put in place preventive measures by partnering with different local, international agencies as well as other stakeholders.

“Since the outbreak of lead poisoning in April 2015 we have been working with partners in Niger State to ensure there is no recurrence of such ugly tide.

With the combined supports of different international agencies, including the Medecins San Frontiers (MSF), the United States Centre for Disease Control and Prevention, World health Organization (WHO), the Nigeria- Centre for Disease Control in the Federal Ministry of Health, the Nigeria Field Epidemiology and Laboratory Training Program, we have been able to train staff on laboratory analysis and management of Lead poisoning. We increased the number of staff at Magiro Health post in Rafi Local Government to support those on ground in containing the outbreak; and Kagara General Hospital in the local Government was integrated to serve as a treatment center for lead poisoning victims.”

He said the conference was apt as it would help with resolutions to prevent the outbreak of lead in any part of the country adding that the idea of the conference would also bring together multiple sectors and stakeholders to look into the need for collaborative approach in preventing lead poisoning.

He further disclosed that because of the value attached to solid minerals and as a key source of economic growth, Niger State is establishing a mining city which he said “will be the first of its kind in Nigeria.”

He explained that the mining city would be a comprehensive solution that will include a processing center, on site laboratory, trade and investment center, training center and mining supply store. He added that it would also be equipped to carry out exploratory services that will include geophysics services, geochemical sampling, resource estimation, reserve calculations, data interpretation and target generation.

He also said that the mining city would have a data room on the mineral deposits in the State, a ready market for processed minerals and it will promote safer mining methods in the mineral sector.

Declaring the conference open, Vice President Yemi Osinbajo called the regional and international stakeholders to come together to find lasting solution and avert future outbreak of lead poisoning in any part of the country.

Meanwhile the Minister of State, Mines and Steel Development, Alh. Abubakar Bawa Bwari disclosed that efforts are on by the Federal Government on the collaboration of foreign and multi-sectoral assistance to bring an end to lead poisoning in the country.

He said the devastating nature of the incidences in Zamfara and Niger calls for a multi-professional approach to prevent further occurrence since artisanal mining is hard to stop.