As of January 2021, only two African countries made it into the Top 20 Facebook users in the world – Egypt and Nigeria. The current population of Africa is 1,365,294,522 as of April 2021, based on the latest United Nations estimates. Africa population is equivalent to 16.72% of the total world population of 7.8B

The objective of this summary is to give perspective to Africa’s contribution to the global knowledge bank – the internet, the progress being made and the work needed to be done. In the famous words of Mark Twain, “The very ink with which history is written is merely fluid prejudice” of course unless you put effort into re-writing yours. After all, it has been established that allowing others to write your stories for you is dangerous.

The land of the pharaohs comes first, Nigeria, Algeria, South Africa and Morocco round off the top 5 giants on the continent. The distribution of Facebook users in Nigeria is projected to overtake Egypt within several years, as the year-to-year growth rate seems to have slowed in Egypt compared to Nigeria.

Nigeria is clearly a giant here, emphasising the potentials for internet-based businesses in the country as well. This has also reflected in the country being the clear favourite on the continent with respect to Tech Startup funds flowing into the continent. Connected to this data is also the share of Unicorns – companies valued above $1.0 Billion, while there are 635 unicorns in the world, by April 2021, only six are in Africa – with Nigeria accounting for 50% of African unicorns – Jumia, Interswitch and Flutterwave; South Africa has two, and Egypt has the last one, Fawry a payment service platform. 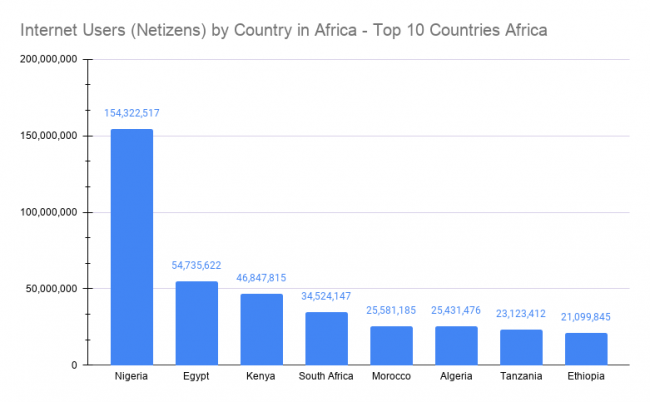 Top 10 Internet Penetration per Population in Africa versus the World

With respect to internet penetration as a percentage of Population, here are the Top 10 Countries in Africa – interestingly, only three in African top internet population made it – Kenya, Nigeria and Libya, the global average is 64.2%. Largely reflecting the fact that African countries are growing, however not fast enough to catch up with the rest of the world.

Kenya is first on the continent with respect to internet penetration as a percentage of the population, Libya, Nigeria, Mauritius and Seychelles round off the top five. 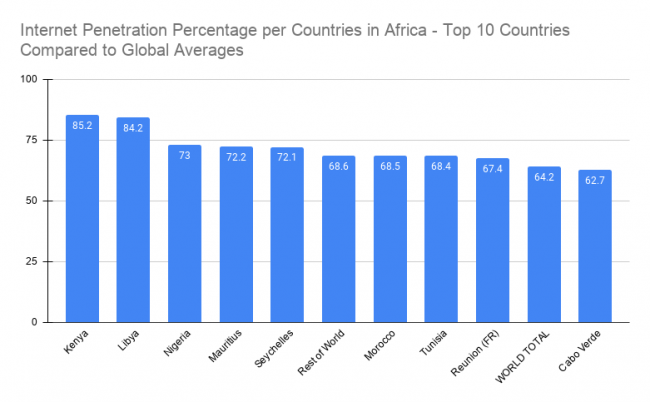 While the data from Statista is not up-to-date as previous, it, however, gives a picture of where African countries fall in the global Facebook distribution of users pie.