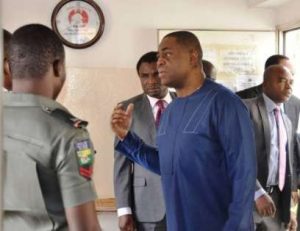 Justice M. S. Hassan of the Federal High Court Lagos today July 4, 2016 granted bail to Nenadi Esther Usman and Femi Fani-Kayode, both former ministers and directors in the Presidential Campaign Organisation of the People’s Democratic Party for the 2015 general election.

Also admitted to bail is Danjuma Yusuf, the third accused in the 17-count charge that borders on conspiracy, stealing, corruption and making cash payments exceeding the amount authorized by law preferred against them by the Economic and Financial Crimes Commission.

The defendants alongside Jointrust Dimensions Nigeria Limited are alleged to have diverted about N4.9 billion belonging to the Federal Government of Nigeria for political and personal use.

They however pleaded not guilty to the criminal information brought against them by the EFCC when they were arraigned. June 28, 2016.

Ruling on their bail applications, Justice Hassan granted the defendants bail in the sum of Two Hundred and Fifty Million Naira each with two sureties in like sum. The sureties must have landed property within the jurisdiction of the court and deposit their Title Documents with the Chief Registrar of the court.

The Title Documents shall be verified by the EFCC within seven days. The sureties shall also file affidavit of means and deposit their International passport with the court.