The Economic and Financial Crimes Commission (EFFC), in an affidavit filed by the anti-graft commission, has released the full details of how funds from the Office of the National Security Adviser (ONSA), during the last administration, through Musiliu Obanikoro, former Minister of State for Defence, was traced to Mr. Fayose’s accounts in Zenith Bank. 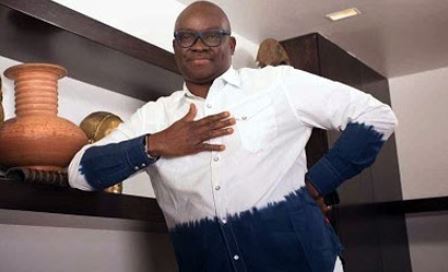 The details show how N1.21 billion out of N2.26 billion paid to the account of Slyvan Mcnamara Limited, a company linked to the sons of Obanikoro was disbursed by Fayose and also gave details of the kickbacks received from Ekiti contractors by Fayose.

EFCC filed the affidavit in response to a suit instituted by the governor at a Federal High Court in Ado-Ekiti, seeking an order directing the EFCC to unblock his accounts with Zenith Bank.

According to Tosin Owobo, an operative of the EFCC, Obanikoro conveyed the money himself to Akure, Ondo State, to Fayose.

“Prior to Obanikoro’s arrival in Akure, Alade Oluseye, a staff of Zenith Bank, had informed his colleague, Lawrence Akande, that the money was being brought through the Akure Airport for lodgement and since the volume of the cash was huge, he would be needing a bullion van to convey the money,” he said.

“On June 17, 2014, Oluseye, accompanied by Biodun Agbele, who was fronting for Fayose, arrived the Akure airport and took delivery of N724,500,000.00 from Obanikoro who was with his ADC, Lieutenant Colonel A.O Adewale.

“After Oluseye took delivery of the money from Obanikoro, on June 19, 2014, Agbele was instructed by the governor to deposit N219million in cash to De-privateer Limited’s Zenith Bank account number: 1013835889.

“On the same day the said Biodun Agbele made another cash deposit in the sum of N300million being part of the proceeds of crimes to the said De- privateer Ltd’s with the 2nd Respondent.

“On the 23rd June, 2014 the sum of N200, 000,000.00 (Two Hundred Million Naira) being part of these proceeds of crime, was also deposited to the said De-Privateer Ltd’s account domiciled with the Respondent by Biodun Agbele whilst acting in concert with the Applicant.

“On the 26th day of June,2014 the said Biodun Agbele on the instruction of Applicant further dissipated the proceeds of crime by depositing the sum of N137,000,000.00 (One Hundred and Thirty Seven Million Naira) to account No. 1003126654 domiciled with the 2nd Respondent in the name of the Applicant.

Owobo also revealed that contrary to the claim by Fayose that the EFCC arbitrarily blocked his account without a valid court order, he revealed that the agency got an interim order from Justice Mohammed Idris of the Federal High Court in Lagos to “prevent further dissipation of proceed of crimes.”

“The Chairman of the Economic and Financial Crimes Commission in the exercise of his statutory mandate contained in section 34 of the EFCC Act having satisfied himself that the various sums of money in the account No. 1003126654, 9013074033, 1010170969 and 1013835888 domiciled with the 2nd Respondent were made through the commission of the Economic and Financial Crimes to wit: stealing and receiving gratification approached the Federal High Court Lagos Judicial Division, for an order directing the Manager of the 2nd Respondent to freeze the said accounts.

“In his wisdom, Hon. Justice M.B Idris granted the 1st Respondent’s application wherein an order of interim attachment was made on the aforementioned accounts. Attached and marked exhibit EFCC 09 is a certified true copy of the said order.

“The said order was a preservative order to prevent further dissipation of proceeds of crimes.”

Having obtained an interim order from a court of law, Owobi therefore argued that Fayose could not use the court as a shield against criminal investigation adding that while the governor has immunity against civil and criminal proceeding, the proceeds of an economic and financial crimes allegedly committed by him do not enjoy such privilege.