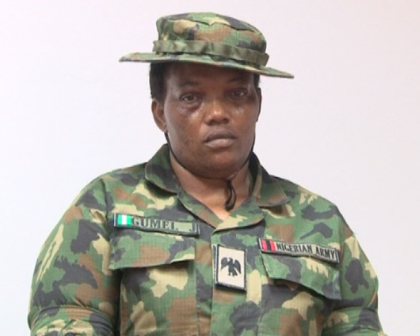 With the ongoing massive reconstruction and rehabilitation of structures and displaced persons in the north-east, appreciating the gallantry efforts of the Nigerian soldiers is key to further boosting the moral of the troops.

This was the position of chief of army staff, Lt. Gen. Tukur Buratai as presented by the chief of civil military affairs at a news conference in Abuja.

Director General, National Agency for the Control of AIDS, NACA Sani Aliyu has flagged off free HIV screening at the area eight neighborhood of the FCT popularly known as UTC.

Traders and residents took advantage of the campaign as part of activity to commemorate the 2016 World HIV/AIDS.

Governor Abdullahi Umar Ganduje  of Kano state says far reaching measures have been taken to ensure that falgore forest in the state is not hijacked by fleeing Boko Haram insurgents to wreak havoc on the north east by the military.

The United States says it will continue to strengthen diplomatic ties between it and Nigeria.

The US deputy chief of mission to Nigeria, David Young said this at a special reception in honour of two staff, Russell Brooks and Aruna Amirthanayagam joining the public affairs arm of the embassy, in Abuja.

The Gambia’s president of 22 years Yahya Jammeh will be replaced by a property developer, Adama Barrow, after losing the general election.

Electoral commission chief, Alieu Momar Njie said Jammeh, who came to power in a coup in 1994, has agreed to accept defeat.

Before announcing the final result, Njie appealed for calm as the country entered unchartered waters.

The Gambia has not had a smooth power transfer since independence in 1965.

Jammeh’s defeat has been greeted with astonishment in the Gambia, where most people expected him to win.

The northern traditional rulers’ council under the leadership of sultan of Sokoto, Muhammed Saad Abubakar the 3rd has commended the Buhari administration’s fight against corruption and commitment to ending the insurgency in the country.

This formed part of the communique at the end of the council’s meeting in Kaduna.

Eight new agreements in crucial economic sectors have been signed between Nigeria and Morocco towards enhancing bilateral relations.

This is the outcome of the high level talks between President Muhammad Buhari and the visiting king of Morocco, Mohammed the sixth.