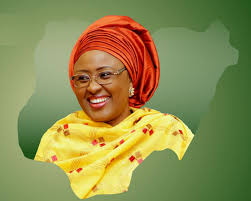 Wife of the President Mrs. Aisha  Buhari has described the late soccer hero, Stephen Keshi as a pride to the country.

In her reaction to the news of the demise of Stephen Keshi, Mrs. Buhari expressed her deepest condolences to the family of Keshi whom she described as a sports hero and whose death is a great loss to the entire federation.

Director media to the Wife of the President, Mallam Zakari Yau Nadabo quoted Mrs Buhari in a release as praying to God to grant Coach Keshi’s family the fortitude to bear the loss.

Stephen Keshi, a winner of the Africa Cup of Nations as a player and coach with the Super Eagles, has died at the aged of  54.

The football legend passed away  on Wednesday after a suspected heart attack in Edo, Southern Nigeria.