Shettima was received by sons of the late Sultan, Alhaji Abba Dasuki and Abdussamad Dasuki, a member of House of Representatives, representing Kebbe/Tambuwal Federal Constituency of Sokoto State as well as other family members. 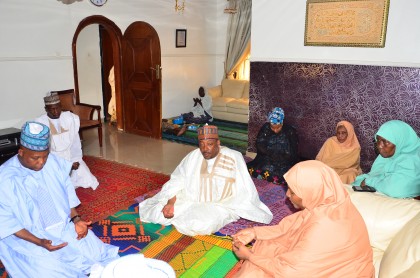 Governor paid glowing tributes to the late Sultan while addressing the mourners.

“His Eminence, our father, lived a very decent life worthy of emulation. Actually, we should be a celebrating his lifetime. He lived a disciplined and exemplary life. He contributed to the growth of our grassroots through his works on local government reforms. The fact that he died with all his senses at the age of 93 tells us of his greatness. I’m afraid many of us here may not have that privilege, that advantage of living up to that age and pass away in your sanity, with all these cases of these dementia prevalent in our world today. His Eminence was a leader and a teacher. May his soul rest in perfect peace” Shettima said.

Governor Shettima walked to various sections of the late Sultan’s residence and paid condolence to widows, elders, other family members and associates of the late Dasuki.

The Governor alongside a member of House of Representatives from Borno State, Mohammed Nur Sheriff departed Kaduna by evening of Saturday on his way back to Maiduguri.