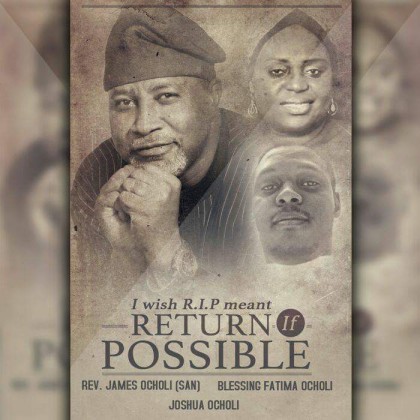 Let’s be honest with ourselves. When some baffling things happen, we question God, if not verbally, at least, in our hearts. But we pretend that we are not querying the Almighty. We say to ourselves: well, no man can question God.

However, in the deep recesses of our inner man, we have questions. But since we don’t want to appear as interrogating God, we then keep quiet, saying “no man can query God.”
It is in the light of that pretension (as if God does not know our very thoughts, even before they are formed in our hearts), that I situate the death of Minister of State for Labour and Employment, Mr James Ocholi, a Senior Advocate of Nigeria (SAN), his wife, Blessing, and their son, Joshua, in an auto crash last Sunday. It was a tragedy of monumental proportions, which brought up a lot of ifs: what if the family had decided against the fatal journey? What if the vehicle had refused to start, and they had aborted the trip? What if the Minister had developed a runny stomach, and so could not travel? What if the car key had got mysteriously missing? What if…? The questions would never really end, and we then lay them at the doorsteps of God: what if God had not allowed the crash to happen? And of course, He has the power to have prevented it. He is omnipotent. He has all powers. He is omniscient, knowing all things. When James Ocholi was born in November, 1960, God knew he would be recalled home on March 6, 2016. When he courted Blessing, married her, and they began to raise a family, God knew they would both die the same day, continuing their romance into eternity. Or did God not know? He must have known. But could He have stopped such tragedy from happening, thus saving us from sorrow, tears and blood? He could have. So, why didn’t He? Baffling. Confounding. Astonishing.

Yes, I am asking questions, but let me pretend that they are questions of faith. The news of the decimation of the Ocholi family sent me into a very painful deja vu. Just last December, my sister, a professor of Dramatic Arts at the Obafemi Awolowo University, Ile-Ife, had died in a gruesome accident on the Lagos/Ibadan Expressway. Foluke Ogunleye died along with her brother-in-law, who had visited from America, and was being ferried to the airport in Lagos to catch a flight later that evening. Rather, what he boarded was an eternal flight. He went on a journey of no return on a famished road.

When I heard about the Ocholis, I remembered the Adesinas, the Ogunleyes, and the pain we bore, and still bear. Don’t I still shed a silent tear when nobody is looking? Don’t I still sigh and shake my head mournfully whenever I remember my sister? Some broken hearts really never mend. And of course, the questions pop up again. What if…?

James Ocholi was no ordinary, inconsequential man before God. He was a devout, humble man. He served God in many ways. He was an ordained reverend of the Salem Family Church, though he did not flaunt the title like a badge of honour. He rather let his faith speak through his works. Yes, faith without works is dead. But Ocholi combined faith and works. Those who knew him saw piety in him. They saw humility. They saw the unobtrusive, self-effacing nature of a man who knew God. A man who had been national secretary of the Full Gospel Businessmen’s Fellowship. When Ocholi was thrown out of his Sports Utility Vehicle on Kaduna-Abuja road last Sunday, and his body battered and mangled, it was no ordinary man that was being treated thus. It was a man of God, who was returning home to the God of man.
His time was up, we console ourselves. Yes, his time may have been up, but couldn’t he have slept, and not woken up? If Heaven was so much in hurry to have Ocholi, his wife and son back, because they were needed to sing tenor, soprano and bass in the choir above, could they only have been recalled in such cruel circumstance?

Cruel! I must watch my words. On Wednesday, at the Federal Executive Council (FEC) meeting, a special session of tributes had been held for Ocholi. Minister after Minister had spoken, recalling good things about the deceased and their departed colleague. Very moving and poignant. But the words that continued to resonate in my ears and mind came from Minister of Agriculture and Rural Development, Chief Audu Ogbeh. He ended his oration by giving thanks and praises to God. He then declared:”God is too kind to do anything cruel.”

Profound. Thoughtful. Illuminating. God is too kind to do anything cruel. But who killed the Ocholis? The Devil? He was not supposed to have such latitude over the people of God. On that same road that day, armed robbers must have driven through safely. Assassins must have passed. All sorts of malefactors would have travelled safely, so why did a godly family perish? Does the world now belong to the Evil One? Is mankind now helpless before Satan? Only he could have brought such cruelty to the Ocholis and their loved ones, since cruelty is his stock-in-trade. But then, the question again (don’t forget that it’s a question asked in faith o, lest anybody accuse me of anything): why did God allow such cruelty to humanity, to the Ocholi family, to the government, to the church, the body of Jesus Christ, of which the late Minister was an ordained reverend gentleman? Why?

Who can claim to have all the answers? No man. The hidden things belong to God. In August 2013, my mother, and matriarch of the Adesina family had passed on, aged 75. Pastor Dayo Adewumi of my local church, Foursquare Gospel Church, had joined us to bid her a tearful farewell. All the seven Adesina children were inconsolable, but we nursed our wounds quietly. We were still trying to come to full terms with the loss of the woman we called Mama, when my sister died last December, aged 53. When Pastor Adewumi and his wife visited me in my Lagos home, where I was wailing like a wailing wailer, he prayed, and uttered something that was very instructive to me. He said:”Oh God, even as a pastor, this is rather too much for me to bear. Just about two years ago, I joined this family to bury their mother. All the children were there. Now, one of them has been taken away. This is rather shocking.”

True. We go into shock when some unfathomable things happen to the people of God. We ask questions, not out of unbelief, not out of backsliding or lack of conviction. I now dub those posers as ‘questions of faith.’ When I ask them, I am not querying God or His omnipotence. I have seen Him at work in diverse ways, and can never doubt His power and presence. I am a captive of faith in God. A lawful captive. God has a right to hold me. I am His bondservant. I have seen His footprints in the storms, in the skies, on earth, everywhere. It is too late to stop believing. He is too kind to be cruel. Our Agric Minister, Chief Audu Ogbeh was right. Also right is the writer, Juliette Adam, who declared:”Death is the opening of a more subtle life. In the flower, it sets free the perfume;in the chrysalis, the butterfly; in man, the soul.”

I mourn with the Ocholis. Only God can comfort them. As I condoled with President Muhammadu Buhari on Monday in his office, and he told me about the steadfastness and dedication of the departed, I could see his pains. He told me that when Ocholi had wanted to be governor of Kogi State on the platform of the then Congress for Progressive Change (CPC), “I joined him to campaign in almost all the local government areas in the state.” Well, the strife is o’er, the battle done. James Ocholi is out of it all. I have questions. Questions of faith. But no matter what, I join the biblical Job in declaring:”Even if He slays me, I’ll trust in Him.”
What about you?