Vice President, Prof. Yemi Osinbajo, advocates a permanent seat for Nigeria in the Security Council of the United Nations

Vice President, Prof. Yemi Osinbajo, SAN, has advocated a permanent membership status for Nigeria in the Security Council of the United Nations, stating that the country deserves it because of its contributions to international peace keeping, the size of its population and economy.

Delivering a keynote address today at the Africa launch of the Global Commission Report, Confronting the Crisis of Global Governance at the International Conference Centre in Abuja, Prof. Osinbajo said ‘’ Nigeria fully shares the views expressed in the Report, that the United Nation’ Security Council should be expanded including the call in the Report for restraint on the use of veto by the five permanent members of the Council.’’

He continued ‘’in addition, we take the position based on our peacekeeping role in the United Nations, the size of our economy, and the fact that we have the largest population in the continent to say that Nigeria deserves a permanent status in the Security Council’’.

The Vice President is of the view that since Africa is the only continent without a permanent seat in the UN Security Council, Nigeria has the strongest profile to represent Africa and therefore balance the membership composition of the Council. 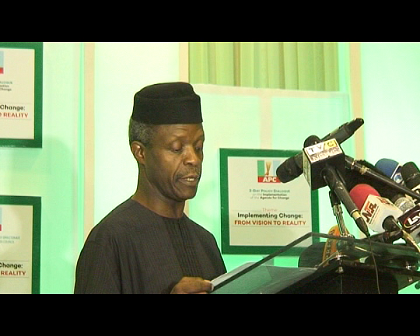 Speaking on the issue of good governance, the Vice President  affirmed that ‘’ it is clear that the crisis of global governance has deeply contributed to and continues to engender insecurity, corruption, injustice, insurgency, violent extremism, terrorism, piracy, cyber-crime, underdevelopment, climate change fears among many vices.’’

Concerned that Africa is at the centre of this crisis, Prof. Osinbajo stated that ‘’for instance, the Report highlighted the issue of intersection between justice and insecurity. It opens up the question of the place of social justice in ensuring security’’. He added that ‘’ there are those who believe that the absence of social justice in parts of our continent is partially responsible for the insecurity experienced in many of the countries in this continent’’.

According to the Vice President, the way out of crisis in Africa is for the leaders to treat their people not as mere statistics but with the respect and human dignity they deserve, explaining that ‘’ this can only be reflected by government in the provision of social services and giving opportunities to their peoples.’’

Said he ‘’ injustices in one state leads to instability or insecurity in neighboring states even if only on account of economic consequences or movement of refugees. Ultimately, no nation is free of the consequences of injustice anywhere’’, he submitted.

Regarding trans-border problems, Prof. Osinbajo said ‘’Nigeria fully shares the view that no one state or states can effectively deal with such challenges. For us as a nation and government, the issue of security, justice and human rights, climate change and sustainable good governance constitute the cornerstone of responsibility we owe our people.’’

He therefore disclosed that such a realization ‘’ explains why the Federal Government of Nigeria is meticulously re-assessing  the entire governance question with the hope of putting in place structures and institutions that can sustain Nigeria in confronting multitudes of challenges identified in the report.’’

Good governance, the Vice President, averred is the panacea to the challenges confronting our world and can only be realized by a determined and visionary leader, with the active cooperation of all segments of the society.

The Vice President who was the event’s Special Guest of Honour launched the Report at the impressive gathering chaired by Ambassador Babagana Kingibe, one time Secretary to the Government to the Federation.

Prof. Osinbajo used the occasion to laud the commitment and vision of Madeleine K. Albright, former United States Secretary of State and particularly Nigeria’s former Minister of Foreign Affairs, Prof. Ibrahim Gambari, both Co-Chairs of the Commission that produced the Report for their pursuit of global security, justice and governance.

In his presentation of the Report, Prof. Ibrahim Gambari underscored the significance of global alliance for security, justice and good governance especially for Africa as a continent. He also supported the Vice President’s call for a permanent Security Council membership status for Nigeria.

to the Vice President (Media & Publicity)