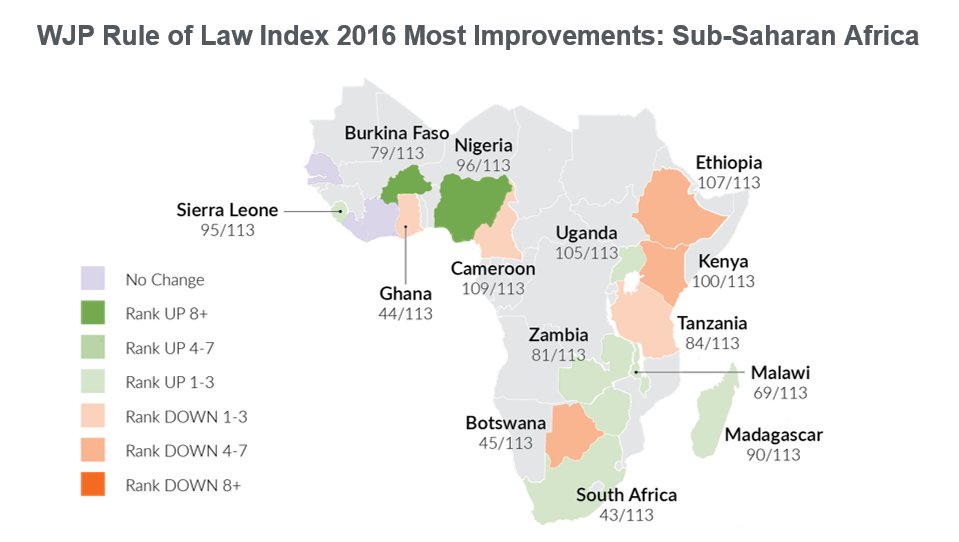 Derived from internationally accepted standards, the World Justice Project’s definition of the rule of law is a system in which the following four universal principles are upheld:

The government and its officials and agents, as well as individuals and private entities, are accountable under the law. 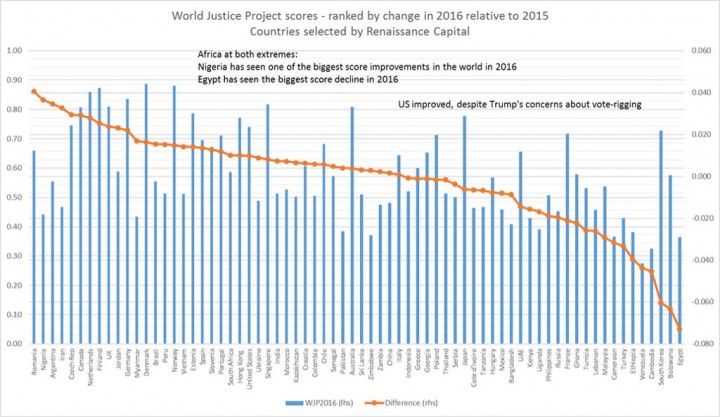 The laws are clear, publicized, stable, and just; are applied evenly; and protect fundamental rights, including the security of persons and property and certain core human rights.

The process by which the laws are enacted, administered, and enforced is accessible, fair, and efficient.
Justice is delivered timely by competent, ethical, and independent representatives and neutrals who are of sufficient number, have adequate resources, and reflect the makeup of the communities they serve.

The WJP(World Justice Project) Rule of Law Index, measures how the rule of law is experienced by ordinary people in 99 countries around the globe. While Nigeria’s justice system did not beat Denmark, Norway, Finland, Sweden and Netherlands to the top of the table, it showed one of the most remarkable improvements between 2015 and 2016.

While Nigeria still has a long way to go(ranked 96 out of 113 countries), no one can deny the return of some semblance of sanity in our criminal and justice systems. The efforts of the Buhari’s led administration is beginning to yield some measurable results.

Constraints on Government Powers
Measures the extent to which those who govern are bound by law. It comprises the means, both constitutional and institutional, by which the powers of the government and its officials and agents are limited and held accountable under the law. It also includes non-governmental checks on the government’s power, such as a free and independent press.

Absence of Corruption
Measures the absence of corruption in a number of government agencies. The factor considers three forms of corruption: bribery, improper influence by public or private interests, and misappropriation of public funds or other resources.

Fundamental Rights
Measures the protection of fundamental human rights. It recognizes that a system of positive law that fails to respect core human rights established under international law is at best “rule by law”, and does not deserve to be called a rule of law system.

Order and Security
Measures how well the society assures the security of persons and property. Security is one of the defining aspects of any rule of law society and a fundamental function of the state. It is also a precondition for the realisation of the rights and freedoms that the rule of law seeks to advance.

Regulatory Enforcement
Measures the extent to which regulations are fairly and effectively implemented and enforced. Regulations, both legal and administrative, structure behaviors within and outside of the government. Strong rule of law requires that these regulations and administrative provisions are enforced effectively  and are applied and enforced without improper influence by public officials or private interests. Additionally, strong rule of law requires that administrative proceedings are conducted timely, without unreasonable delays, that due process is respected in administrative proceedings, and that there is no expropriation of private property without adequate compensation.

Civil Justice
Measures whether ordinary people can resolve their grievances peacefully and effectively through the civil justice system. The delivery of effective civil justice requires that the system be accessible and affordable, free of discrimination, free of corruption, and without improper influence by public officials.  The delivery of effective civil justice also necessitates that court proceedings are conducted in a timely manner and not subject to unreasonable delays. Finally, recognising the value of Alternative Dispute Resolution mechanisms (ADRs), this factor also measures the accessibility, impartiality, and efficiency of mediation and arbitration systems that enable parties to resolve civil disputes.

Informal Justice
Concerns the role played in many countries by customary and ‘informal’ systems of justice – including traditional, tribal, and religious courts, and community-based systems – in resolving disputes. These systems often play a large role in cultures in which formal legal institutions fail to provide effective remedies for large segments of the population, or when formal institutions are perceived as remote, corrupt, or ineffective.