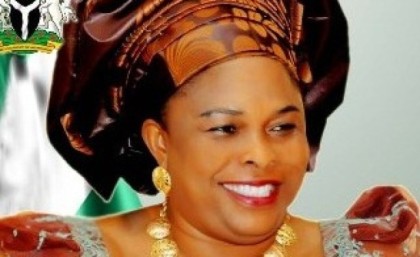 First Lady Dame Patience Jonathan has received the new activated National Identity card from the National management commission. While receiving the I.D  Card, the first Lady challenged them to ensure that those at the rural areas particularly women should be carried along.

President Goodluck Jonathan became the first recipient of Nigeria’s new national eID card, in a ceremony at the presidential villa in the capital Abuja. The cards will be issued to 13 million Nigerians as part of a pilot project, with the ultimate aim of producing a national identity management system (NIMS).

Nigeria’s NIMS is an ambitious attempt to consolidate data from different government agencies, including birth and death records, health insurance, tax information, and driver licensing in a country with a population of 168.2 million people.

The director general of the commission which will implement NIMS, Chris ‘E Onyemenam, said at the launch that the card will eventually be used for border control as well.

“There are many use cases for the card, including the potential to use it as an international travel document,” Onyemenam said. “NIMC is focused on inclusive citizenship, more effective governance, and the creation of a cashless economy, all of which will stimulate economic growth, investment and trade.”

The new cards carry two photographs of the holder, and a chip storing an individual’s biometric information including 10 fingerprints and an iris scan using a system developed by Cryptovision.

Nigeria first attempted to introduce identity cards 10 years ago and, as well as modernising the service delivery and improving bureaucracy, the government is now keen to throw off its international reputation as a hotbed of fraud dating back to the many email-based ‘419 scams’ that originated from the country.

Nigeria now boasts the largest economy on the African continent and its growth as a business centre is now making headlines in the business press.

Corruption remains a major issue in Nigeria, however, and has been credited by Transparency International as being the root cause of the rise of the terror organisation Boko Haram.

Civil liberties NGO Privacy International, which has raised concerns about misuse of surveillance data in Nigeria in the past — including the arrest of four journalists last year — said that the ambition of the data integration is worrying.

“Centralising and combining government databases makes it easy to link together pieces of information about an individual and build a near complete picture of someone’s life,” said the organisation’s legal officer, Anna Crowe.

“This type of capability is extremely invasive. The crucial issue is to put in place safeguards that guarantee fundamental principles of data protection are being respected, such as only using data for the purposes for which it was collected. This is extremely challenging for any country, let alone one that already faces significant challenges around corruption and ensuring respect for human rights.”

Perhaps the most controversial aspect of the cards, however, is that they combine a civil national identity scheme with a strongly commercial initiative. The new cards won’t just operate as proof of identity for citizens — they also function as payment cards backed by the local Access Bank and carry the Mastercard logo on the back.

“National ID schemes can prove problematic in many respects, but commercialisation of such a scheme raises additional, and serious, questions,” Crowe said. “What does Mastercard and the bank’s involvement entail? Will data be shared for commercial gain? How can Nigerians be confident that their right to privacy is being upheld?

“When you register to vote you are doing so for a specific purpose — to be able exercise your rights — not to see your information handed on to a private company without your consent or knowledge.”

If the new cards work according to plan, Nigerians will be able to use them to deposit funds, pay for government services and access pensions, but also to buy goods or withdraw cash from EMV-equipped ATMs and payment points. Mastercard’s business head for West Africa, Omoke Ojumuyide, said that it will be used to offer financial services for the presently ‘unbanked’ and help establish credit ratings for the poor.

“The objective is that every Nigerian bank will eventually be involved,” Ojumuyide said. “The focus is not to create unfair competitive advantage.”

The cards use Mastercard’s pre-payment systems and can be topped up remotely using mobile payments. Ojumuyide said that this will be used for delivering social security and that the government is looking at ways to deliver benefits such as hydrocarbon subsidies — which are currently paid directly to fuel distributors — directly as cashless payments to citizens.

Right now, Ojumuyide said, the primary aim is to establish how a mixed use card will work during the pilot program, and long term agreements haven’t yet been signed. The different applications on the card will be fully siloed, she said, in order to allay privacy concerns.

“Mastercard does not handle the biometric data,” she said. “We are strictly confined to the payment technology on the chip.”