President Goodluck Jonathan says Interim Government has no place in Nigerian constitution restating that his administration will never be part of unconstitutionality.

President  Jonathan who was referring to insinuations in some quarters that there is an arrangement for interim national government said that the present administration is always guided by the constitution of the country and will never be part of such arrangement. 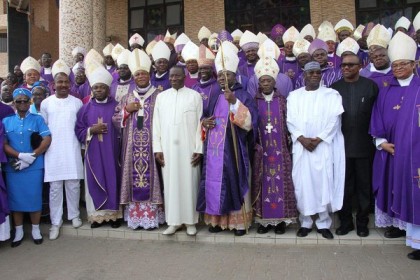 The president who expressed appreciation to the church leaders for their continued prayers, said his re-election bid is not worth the blood of any Nigerian and that he will follow legitimate means to achieve that.

Earlier, the Archbishop of Abuja, John Cardinal Onaiyekan had urged politicians to play the game according to the rules with sincerity of purpose so as to have a smooth and peaceful elections and for the evolution of a good democratic culture for the country.