Borno State Chapter of the Christian Association of Nigeria has described as false and baseless allegation that it received three million naira bribe from the PDP in the forthcoming elections.

Chairman of the Association, Rev. Titus Pona at a press conference in Maiduguri challenged those peddling the rumour to come up with proof.

The allegation which was credited to one Pastor Musa Ali Kalamu Dikwa from Borno state, claimed that the president of the federal republic of Nigeria, Dr Goodluck Jonathan has bribed pastors in the nation with the sum
of 7billion Naira to help campaign for him towards his re-election in 2015 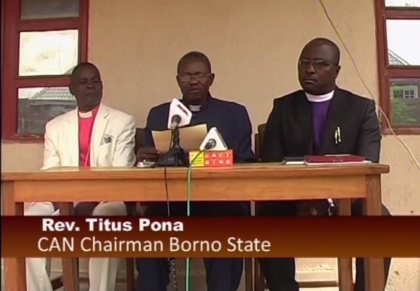 Borno State CAN chairman Rev Titus Pona said Pastor Ali Kalamu’s  allegation in  that regards and his claim to
be  an associate pastor with EYN center in Maiduguri are untrue.

According to him Pastor Kalamu has been away from Maiduguri for quite some years. He maintained that while in Maiduguri he was the leader of a mission organization known as Kanuri Gospel Mission which he abandoned and is not aware of his position as Executive Director of Voice of the Nothern Christian Movement.