Former Federal Commissioner for Information and top figure of the People’s Democratic Party, PDP, Chief Edwin Clark has decided to quit active Politics and has urged Nigerians to give full support to the anti corruption crusade of President Muhammadu Buhari’s administration for a better Nigeria. 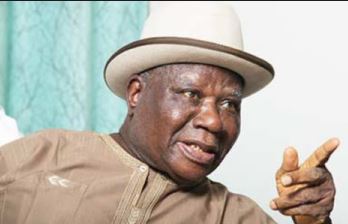 Foremost Ijaw leader and a former federal commissioner, Chief Edwin Kiagbodo Clark, says he has quit the Peoples Democratic Party (PDP) and partisan politics but would remain an elder statesman and father of all.

The politician also hailed his kinsman, former President Goodluck Jonathan for his stewardship but added that he lacked the will and power to fight corruption because he kept corrupt people close, describing him as a “gentleman.”

He further stated that it will be wrong for anyone to accuse Mr. President of fighting a selective war in his drive to return sanity into the polity. Also, called on Nigerians not to distract the President so he can remain focused in his determination to rid the country of corruption.

He said these while receiving the “Think Nigeria First Initiative” (TNFI) led by Director General, Abubakar Tsanni in Abuja.